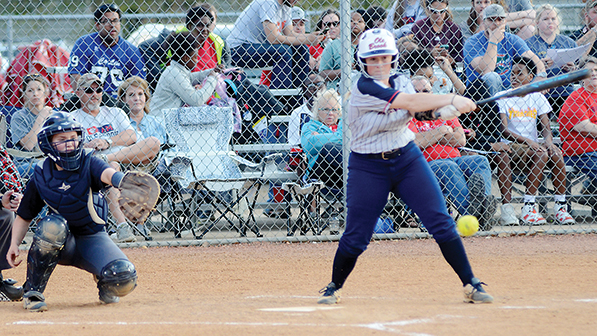 Photo by Dave Linton Ole Brook eighth-grader Layla Woodall blasts a softball down the first base line during the Lady Panthers’ victory over the Bogue Chitto Lady Bobcats.

Seven innings wasn’t enough, and neither was eight or nine — both squads of lady cats fought each other to 10 innings before Brookhaven made the difference. A deadlocked pitching battle eventually went Ole Brook’s way after Lady Panthers batters swung and swung to knock in one last runner for the victory.

Facing one out in their half of the second, Lady Bobcats junior Baileigh Jackson made her way to first after being hit. Freshman Kayci Beth Wallace followed with a bunt single. Wallace would steal second base, taking away any chance for the Lady Panthers to turn a double play. Seventh grader Alyssa Leggett scored Jackson from third base on an RBI sacrifice. The Lady Bobcats were able to get out of the inning with a strikeout.

Neither team reached the bases in the third inning. Batting in the top half of the fourth, Lady Bobcats’ sophomore Codi Leggett connected with a one-out double. The Lady Panthers left Leggett on second, getting out of the inning on a strikeout and ground ball out.

Batting in the bottom of the fourth, Lady Panthers junior Kat Wallace worked the count full then produced a double. The Lady Panthers were unable to take advantage of the double, as the Lady Bobcats were able to get out of the inning.

Both teams managed to get runners on bases in the fifth but were unable to capitalize as the defenses stepped up to end the inning.

Trailing 1-0 heading into the bottom half of the seventh, Brookhaven’s Jadeyn Fuller got things started with a single. With two outs sophomore Meg Foster came up big for the Lady Panthers with her single. Running for Fuller, seventh-grader Emma Campbell came around to score, sending the game into extra innings tied at 1-1.

Under the tiebreaker rules, Jackson was put on second base to start the Lady Bobcats half of the eighth inning. Alysaa Leggett scored Jackson on an RBI single. The Lady Panthers were able to get out of the inning, getting the next three batters out.

The Lady Panthers tried to put the game away in the eighth. Eighth-grader Kyja Willis, sitting on second, scored before sophomore Lynsey Nations was thrown out at home trying to stretch her triple into an inside the park home run.

Lady Bobcats’ freshman Juilanna Frazier put her team back on top in the top of the ninth on an RBI double. The Lady Panthers stayed in the game in their half of the ninth, loading the bases with one out. Sophomore Kyla Henderson scored eighth-grader Layla Woodall, who was running for senior Rileigh Allen, with an RBI sacrifice before the Lady Bobcats could get out of the inning.

Wallace ended the game in Brookhaven’s favor with an RBI single, giving the Lady Panthers a 4-3 win in ten innings.

“I think we kept battling the whole time,” said Lady Panthers’ coach Mandy Vinson. “We made big plays whenever it counted. Bogue Chitto did a really good job tonight. We were just able to execute a couple of plays there at the end to help us get the win.”

“We just didn’t finish when we needed to,” said Leake.

“Defensively, we got to finish those moments,” he said. “We had their backs to the wall. We came in and did what we had to do, we got our runs. It was a great game. I love playing in these moments but if you want to win, you got to finish. I’m proud of the girls.”

Senior Haley Nations, who picked up her 100th strikeout early in the game and added onto it with a dozen more, pitched all 10 innings, resulting in four hits and one unearned run.