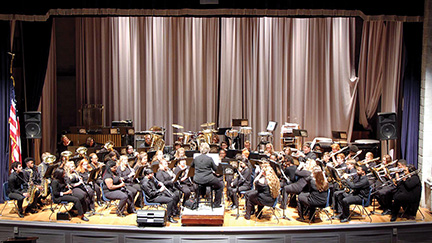 She grew up in Wesson. She graduated from Wesson Attendance Center last year. And now she’s going to school — in Wesson, still, as a freshman at Copiah-Lincoln Community College. But a year from now, she’ll pay a visit to the Windy City.

“I feel very excited and very blessed. I’ve never gone anywhere like Chicago,” she said. “I’m ready to see the tourist attractions, the architecture. And I can’t wait for the music.”

Music is why Martinez is going in the first place.

She’ll travel as a sophomore with Co-Lin’s Concert Band after the ensemble recently accepted an invitation to perform at the annual Percy Grainger Wind Band Festival in March 2019, a prestigious three-day celebration of concert bands that invites only four bands from across the nation each year.

“I’m really excited for our students to have this opportunity,” said Co-Lin Director of Bands Juanita Proffitt. “We’re really honored. Our students work hard to have a good product here, and for them to be able to have the experience to play music like this, to have this chance, makes it that much more amazing.”

The festival will be held March 22-24, culminating in the band’s performance at Chicago’s historic Orchestra Hall at Symphony Center. Students will spend the days seeing America’s third-largest city, practicing for their performance and learning in clinicals taught by Mallory Thompson, director of bands and coordinator of the conducting program at Northwestern University.

Co-Lin was chosen as one of the four bands invited next year after Proffitt submitted a video recording of the band’s 2017 spring concert, in which students performed Charles Wiley’s “Old Scottish Melody,” an arrangement of “Auld Lang Syne.”

Proffitt submitted the recording hoping for the best.

“I asked them, ‘Do you need more?’ They said, ‘Oh, no. You have a great band,’” she said. “At that time we had no idea we would receive an invitation.”

In Chicago, the band will play two works by the festival’s namesake — Percy Grainger, an Australian-born pianist and composer remembered for his musical innovations in the first half of the 20th century. Grainger’s biggest contributions to the art were a revival of interest in British folk music and his generous writing of concert band arrangements.

Whereas other famous musicians favored symphonies, Grainger said of the concert band, “as a vehicle of deeply emotional expression it seems to be unrivaled.”

All four bands invited to the performance will play at least one Grainger selection. Co-Lin will play two — “Children’s March” and “Green Bushes.” They will also perform “An Original Suite” by Gordon Jacob, another prominent composer for wind bands.

Proffitt doesn’t know who the other three bands will be — in the past the festival has chosen all manner of bands from high school to college and university. She does know her students are up to the challenge.

A band is just a group of musicians. Co-Lin freshman trombonist Alyssa Lane said her group is more like a family.

“We’re such a close-knit group because we all come from the same foundation. Most of us started band back in the fifth grade — we’ve all gone to clinics, already met each other, grown close and developed friendships,” said Lane, a Lawrence County graduate. “You don’t have to be blood to be family, as long as you have people around you who love you.”

Not only that, but the family is faithful to the craft. Trumpet-player Kaylea Smith, a Loyd Star graduate, said performing with Co-Lin brings on new levels of commitment.

“In high school it’s different. Now you’re older and more mature, so you don’t have to be anybody’s momma, you don’t have to baby anybody — you’re there because you want to be,” she said. “It’s really cool to be a part of something where everyone is so dedicated.”

Smith said Co-Lin’s musicians are already beginning to tighten up in anticipation of next year’s festival, though lots of time — and even more work — remains to be done.

Moving a concert band across the country is an expensive undertaking, and the Co-Lin band needs the community’s help.

On April 5, the band will run Broma’s in Brookhaven, waiting tables and selling Longbottom Coffee to raise money for the trip.

The band will also perform at a dinner theater April 12, alongside the Co-Lin Jazz Band and Ambassadors at the Thames Center. The show begins at 7 p.m. Tickets may be purchased by calling the college at 601-643-5101.

“We’ll be fundraising until we step on the bus to go,” Proffitt said. “It will be worth it to give the students a chance to perform in Chicago Orchestra Hall.”

Though this will be a Union Church songwriter’s fourth appearance at Music and Art in Trinity Park when the spring... read more