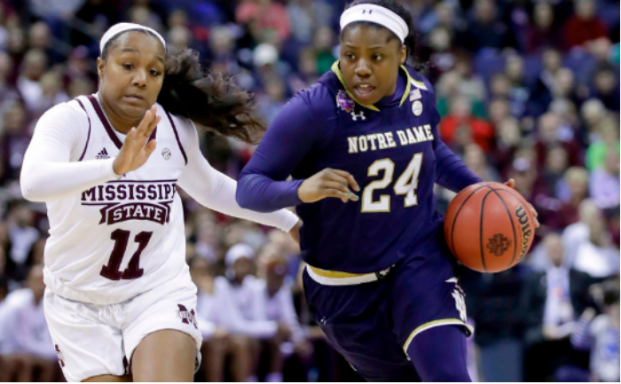 Arike Ogunbowale hit a 3-pointer from the corner with a tenth of a second on the clock to lift Notre Dame to its second women’s basketball title, a 61-58 victory over Mississippi State in the NCAA championship game on Sunday night.

It was the second straight game that the junior guard hit a shot in the final second to carry the Irish. Her jumper with one second left knocked off previously unbeaten UConn in the semifinals.

With the game tied, Ogunbowale took the inbounds pass and dribbled to the corner, hitting the game-winner.

“It just felt right,” said Ogunbowale, who scored 14 of her 18 points in the second half. “I practice late-game all the time. I just ran to Jackie and said, ‘Throw it to me, throw it to me.’”

Ogunbowale earned most outstanding player honors for the tournament.

The title came 17 years to the day after the Irish’s only other championship in 2001.

Notre Dame had been to the championship game four other times in the previous seven years, falling short each time. But this version of Muffet McGraw’s squad refused to lose, and the run was even more improbable because the Irish lost four players over the season to ACL injuries.

Marina Mabrey hit a 3-pointer from the wing and then Jackie Young had a shot in the lane to tie it.

After Teaira McCowan missed a layup with 27.8 seconds left, both teams turned the ball over. McCowan then fouled out of the game stopping an Irish fastbreak and set up the final 3 seconds.

For the fourth straight NCAA game, the Irish found themselves trailing at the half. They were down 40-25 early in the third quarter before finally getting on track offensively. The Irish closed the period with a 16-1 run to tie the game at 41 heading to the final quarter.

The Irish were buoyed by severe foul trouble by Mississippi State that saw all five of its starters with three fouls in the third quarter.

Bobcats and Bears finish the fight in 3-game series