Evidence, science are focus on Day One of Cordarryl Bell murder trial 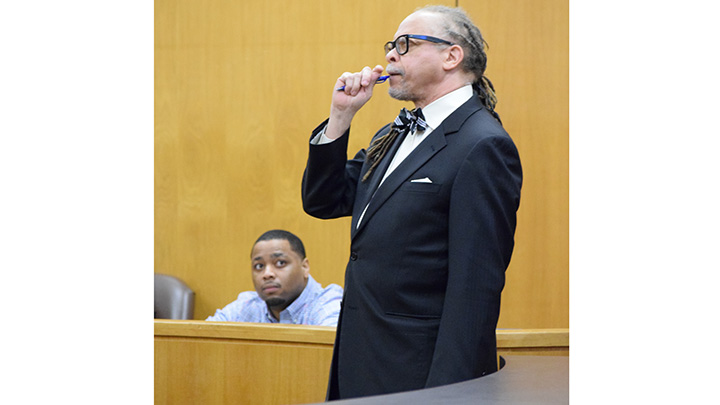 Photo by Adam Northam Defense attorney Imhotep Alkebu-lan speaks before the court on Thursday. Defendant Cordarryl Bell took the stand during the day’s proceedings, testifying, “I felt like if I didn’t shoot him, he was gonna shoot me.”

Prosecutors relied on science and procedure in the opening rounds of the Cordarryl Bell murder trial Wednesday afternoon, with the defense largely accepting the data and holding back for later in its attempt to claim self-defense.

A Brookhaven police investigator and two forensic experts from the state crime lab took the stand to reconstruct the events and after-effects of the Nov. 2, 2015 shooting death of 26-year-old Aquarius Nelson, with the district attorney’s office introducing numerous photographs and reports into evidence with rapid-fire questions in its quest to prove Bell guilty of murder.

By contrast, defense attorney Imhotep Alkebu-lan accepted most of the entries casually, saving his punches for later. His strategy appears to be not to dispute the fact bullet holes and bloodstains appeared in Ole Brook that day, but why.

Nelson died of multiple gunshot wounds in the emergency room of King’s Daughters Medical Center on Nov. 2, 2015, with Bell almost immediately becoming a suspect in his murder and another shooting from earlier that same day. Bell hit the road for the next two months and was eventually captured by U.S. Marshalls in Erie, Pennsylvania, in late January 2016.

District Attorney Dee Bates and assistant DA Brendon Adams avoided any mention of why the shooting took place, instead using the trial’s opening day to review physical evidence. They presented the court with dozens of police photographs showing the shot-up and bloodstained white Chrysler used to rush Nelson to KDMC and evidence-flagged shell casings and bullet fragments found around the home where the shooting occurred at 115 Walnut St.

Brookhaven Police Department Capt. Clint Earls was the first witness called, bringing with him the actual casings and fragments he collected from the scene that day. He kept the stacks of taped and initialed paper bags in an old Amazon box.

The state’s case ran into a few hiccups with Earls — he had only 10 of the 11 .40-caliber casings recovered that day and had no idea what happened to the missing brass, saying only that former BPD Chief Bobby Bell retrieved the evidence from the crime lab after testing was complete. Alkebu-lan successfully objected to the casings being entered as evidence during Earls’ testimony due to a lack of “chain of custody,” the legal documentation of who has ownership of the evidence.

The rest of Earls’ testimony was a solid reconstruction of the events of Nov. 2, 2015.

He told the court how he responded to the ER and photographed and searched the car before performing a search and investigation at the home on Walnut Street, going over the names of the people he came in contact with. Joshua Cole, who drove Nelson to the ER, was mainly questioned by BPD Detective Penny Banks, both of whom are scheduled to testify.

Earls also took statements from neighbors Todd and Wendy May, and the home’s owner — Andrew Fortson, who Earls said feared for his life and came to the police station to give a statement. Fortson is also scheduled to take the stand.

Earls’ most important contribution to prosecutors was his immaculate documentation of evidence, which allowed the state to establish the shooter fired the 11 shots from near the kitchen door of the home toward Nelson as he sat in the Chrysler on Walnut Street. Earls also testified no weapons or shell casings were found in the car, and no bullets struck the house.

“The Brookhaven Police Department determined Cordarryl Bell was a suspect, and I issued an affidavit for murder,” Earls said.

Alkebu-lan seemed to frustrate Earls during his questioning, when he made the captain admit several times he testified during a February 2016 hearing he did not know why Cole and Nelson traveled to the home on Walnut Street. Alkebu-lan rephrased and repeated the question three times, slowly — almost distractedly — turning toward the jury as he gestured.

Alkebu-lan transitioned from those repeats to ask Earls if he remembered testifying it was possible the pair were coming to the house “to do harm” and that Bell acted in self-defense.

“It’s possible, but during the course of my investigation, not probable,” Earls said.

Both Alkebu-lan and the prosecution established Nelson as right-handed. The prosecution didn’t do much with that information Wednesday, though Alkebu-lan stepped before the jury and made gestures similar to cross-pulling a weapon from a belt.

Jacob Burchfield, a trace evidence expert from the state crime lab, took the stand next and testified that a single particle of gunshot residue was found on Nelson’s right palm.

Alkebu-lan read from Burchfield’s report on Nelson, quoting the scientist’s conclusion that even that single particle did not preclude Nelson from having been in the proximity of a fired gun, likely attempting to establish the deceased as a person of danger in the jury’s eyes.

Adams seemed to score a point for the prosecution with his final question for the scientist — is a single particle normal for someone who has fired a gun?

“Depending on the circumstances, no sir,” Burchfield said.

Lori Beall, a crime lab forensic scientist specializing in firearms identification, was the last witness to take the stand on Day 1. The prosecution was very clinical in its questioning of Beall, questioning her only far enough to establish all 11 shell casings and three of the four bullet fragments were fired from the same weapon (the fourth bullet had no identifying marks).

Alkebu-lan used his final questions for Beall to keep driving his strategy of accepting evidence while deflecting intent.

The trial resumes at 8:30 a.m. Thursday with seven more witnesses scheduled to appear.