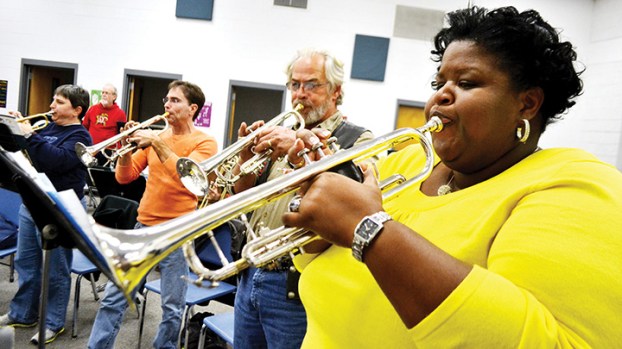 It’s been true for 50 years — everyone wants to hang out with the band.

The night of April 17, anyone and everyone can hang out with the Ole Brook Wind Symphony at their 2018 Spring Concert, which begins at 7 p.m. at Easthaven Baptist Church. The band will entertain with an hour’s worth of music spanning several genres, and admission is free.

“It’s free, and it’s something completely different from anything else you’d usually do,” said symphony tuba player Steve Edge. “If you enjoy music, there’s a nice spectrum, from marches to jazz, and the variety is fun.”

The symphony will play numerous pieces to fill the hour.

Some selections include Joe Bishop’s and Woody Herman’s 1939 jazz standard “Woodchopper’s Ball” and Glenn Miller’s 1941 big band classic “String of Pearls.” They symphony will play an arrangement of “Somewhere Over the Rainbow” with a vocal soloist, then shift into an arrangements of American classic band music in “An American Spectacular.”

Every wind band performances needs a military march, so the Ole Brook Wind Symphony will fire off the legendary John Philip Sousa’s “Washington Post March” for the patriots in the crowd. To keep things nice and international, the band will also perform the saucy “España cañí,” a famous Spanish piece known as The Spanish Gypsy Dance.

An arrangement of the hymnal “Take My Hand, Precious Lord” will also be performed.

The Ole Brook Wind Symphony practices on Tuesday nights at 7 p.m. at Alexander Junior High School. It was founded in 2001, and this year consists of about 30 members, ranging in age from high school to the Book of Genesis.

“I know we have a high school junior, and I think our most-senior member is 85 or 86,” Edge said.

Membership in the symphony is open to anyone with an instrumental background, and skill is negotiable. The band’s membership contains teachers, students, engineers and other every-day professionals who give one night a week to stay connected to music.

“They enjoy playing music, and they enjoy the company of the folks around them,” Edge said of the band. “Unlike football, we don’t get too old to play. There’s usually enough left of us where we can play a long time — not many 80-year-old football and basketball players out there.”

Edge invites anyone who lugged around a bass drum, blew spit out of a horn or popped reeds on a woodwind to visit the symphony’s practices on Tuesdays to inquire about membership.

“Why don’t you come play with us? We’ve got a bunch of folks similar in many ways — many haven’t played in years, and they pick up their instrument again,” he said. “It’s OK to not be proficient to start with. You’ll get better as time goes on, as you practice. You don’t have to be an expert, you just have to want to play.”