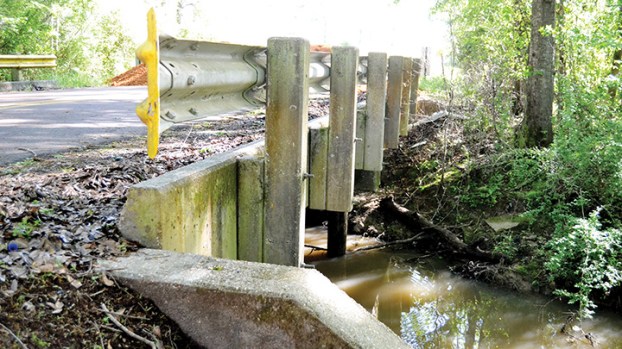 Photo by Donna Campbell/Brookhaven officials closed one of two bridges on Williams Street Wednesday to begin emergency repairs after state inspectors deemed the timber pilings were unsafe. The bridge is between Ozark Lane and Eastgate Circle.

How long it will be closed is up in the air.

“We just don’t know,” said Brookhaven Public Works Director Keith Lewis. “Everybody that we know of is working on bridges now. They’re everywhere.”

Lewis said engineering consultant Ryan Holmes with Dungan Engineering is getting quotes for the emergency repairs.

The two-span, precast bridge is located between Eastgate Circle and Ozark Lane in a residential area with moderate traffic.

Holmes informed the Brookhaven Board of Alderman about the need for the closure at their first monthly meeting Tuesday night.

He said inspectors from a firm in Baton Rouge are finishing the 2017 inspections. Mayor Joe Cox received a letter Tuesday with the closure instructions.

Holmes recommends replacing all of the timber pilings with concrete pilings.

“Ideally, what we would probably do is pick up the precast part — it’s all bolted together — and set on top of the timber pilings,” he said. “We’ll take it apart and set it aside, put new concrete pilings or steel pilings and set it back down.”

Holmes said it is more sensible to replace all of the timber pilings with concrete, rather than leave a few timber pilings in place. Those would eventually need to be replaced down the road as well.

“Quite a few of those are in pretty bad shape,” he said.

City workers Wednesday morning placed dirt piles at each end of the bridge as well as barricades and warning signs.

“By May 17, we’ve got to have permanent signs up if the repairs haven’t been made,” Holmes said.

Cox said the residents in that area depend on access to Williams Street for travel.

“We’ll get it blocked off to traffic and then start getting some figures for what we’re going to need to do because obviously that’s a busy street through there,” he said. “It doesn’t need to be closed any more than possible.”

In other business Tuesday, Sonja Victory Cannon, a Brookhaven resident for 18 years, came to the board to request that chlorinated water be kept out of her pipes.

Cannon is allergic to chlorine, she said.

She’s had the problem for a while.

She was told that she could hire a plumber herself to install a filter to keep the chlorine out of the water coming out of her faucets, but the price is too high.

“I really can’t afford to do that,” she said.

So Cannon turned to the city for help.

Xifos said the state requires the city to meet a certain level for chlorine content in its water system. To provide Cannon with non-chlorinated water will require permission from the state health department, he said.

Cannon said she’s gone to a doctor about the allergy — which manifests as a white rash — but her only diagnosis came back unspecified.

“Let’s get it specified,” Cox said. “Let them do the tests on you.”

Xifos said her physician will need to submit his findings to the state health department and the city will take action based on their decision.

It’s been true for 50 years — everyone wants to hang out with the band. The night of April 17,... read more