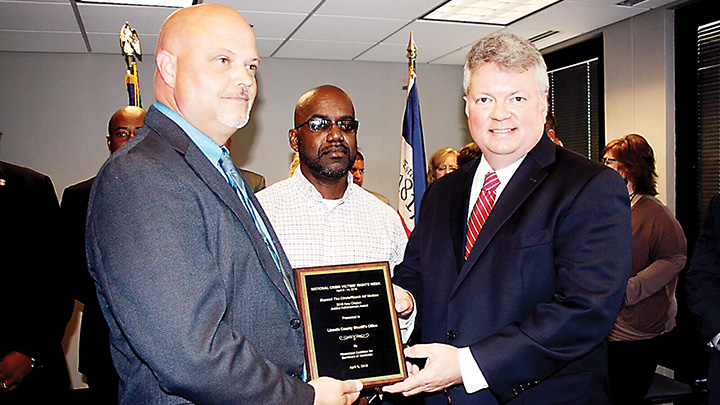 Photo submitted/First responders and others who were involved in the search, apprehension and indictment of the suspect wanted for killing Lincoln County Sheriff’s Deputy William Durr and seven others in 2017 were given the Amy Clayton Justice Achievement Award Thursday by Attorney General Jim Hood. Pictured, from left, are Sheriff Steve Rushing, Deputy Chief Deputy Johnny Hall Jr. and Hood.

Lincoln County Sheriff Steve Rushing accepted recognition Thursday for members of his department who responded to the tragic events that unfolded May 27, 2017 that left his deputy and seven other people dead.

The Lincoln County Sheriff’s Office, the District Attorney’s Office of the 14th Judicial District in Brookhaven and the Mississippi Highway Patrol’s Bureau of Investigation were recognized with the Amy Clayton Justice Achievement Award for their participation in the search and apprehension of the suspect, Willie Cory Godbolt, who is accused of killing Deputy William Durr, a two-year veteran on the force, and seven other people after Durr arrived on the scene of a domestic dispute.

“I am humbled at the recognition,” Rushing said. “It was a great honor but it was bittersweet with the loss of William.”

The award was one of three given by Attorney General Jim Hood to recognize National Crime Victim’s Rights Week, which begins today, to honor Mississippi crime victims and those who are advocates for victims in the state. The awards were presented at the annual Mississippi’s Crime Victims’ Rights Awards ceremony, which held the theme “Expand the Circle: Reach All Victims.”

The Distinguished Service Award went to David Whitehead, trace evidence section chief for the Mississippi Forensics Laboratory. The Image of Resilience Survivor Award went to Velma Warren, who is a survivor of domestic violence who founded Connected Hearts Inc. in 2009. She opened the first resource center in Starkville that serves domestic violence victims in the surrounding communities.

“These individuals have gone above and beyond the call of duty,” Hood said. “Victim services are one of the best public-private relationships in government of which I’m aware, and this year’s award recipients are a testament to that. Their lives are dedicated to what we’re all called to do: take care of the least among us.”

The Crime Victim Compensation Program, administered by the Attorney General’s Bureau of Victim Assistance, reimburses eligible crime victims or next-of-kin for crime related expenses not covered by other sources, such as insurance. This past fiscal year, the program distributed more than $2.8 million to 969 Mississippi victims of crime who were in need of financial support due to injuries related to the criminal acts perpetrated against them. Eligible applicants may receive compensation for medical treatment, mental health services, funeral costs and several other types of expenses. The maximum amount distributed per crime is $20,000.

“Although we cannot predict what comes our way in life, victims of crime or those who have lost a loved one to crime can take comfort in knowing our state has many professionals to help them through their experience and identify sources of relief,” Hood said. “I’m proud that our office is home to the state’s victim compensation program, but our work would not be possible without the dedicated law enforcement officers, victim advocates, child and family services, and community leaders in Mississippi who help us in making the victim’s experience less burdensome.”

For more information on the services provided by the Bureau of Victim Assistance, call 800-829-6766 or visit www.agjimhood.com. This year’s ceremony was made possible through partnerships with the Mississippi Department of Corrections, Mississippi Coalition for Survivors of Homicide, and Mississippi Coalition Against Domestic Violence.