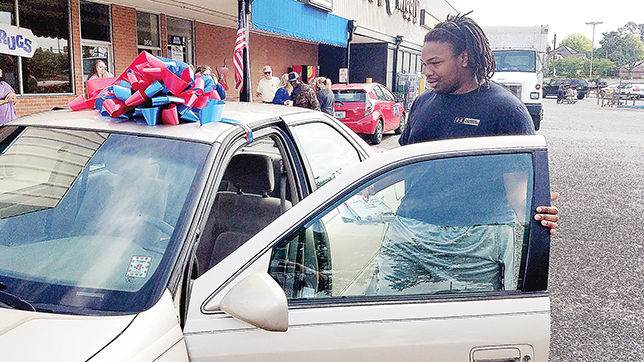 Jamian Lewis is the type of young man who goes out of his way to help others, even if it means walking to do it.

But thanks to the generosity of some of his friends, he won’t have to hoof it anymore.

A group of people who know Lewis through his bagger job at Piggly Wiggly on West Monticello Street decided they’d raise money to purchase the 19-year-old a car of his own. They gave it to him Friday.

The group took donations and raffled an Easter basket to acquire a 1998 Toyota Camry and even bought his tag and insurance, said Jessica Walters, who organized the surprise.

Walters works at a nearby business, as does many of the folks in on the act. She said she admires Lewis’ work ethic and his friendly, helpful attitude.

That’s how she knew he needed a car.

Lewis had mentioned to her that he wanted to go to Copiah-Lincoln Community College this year, but didn’t know how he’d get there. He hoped to get transportation figured out, but it was hard enough to score rides to his two jobs even living close by. It would be difficult to walk to Wesson for class.

Besides bagging groceries at the Pig, he washes dishes at Magnolia Blues BBQ Company.

“I was working two jobs to get a car and my mama was going to help me,” Lewis said.

Garrett said Lewis usually catches a ride to work with his cousin, who is also a Pig employee. Lewis trudged to work in the rain once when he couldn’t get a ride.

“He lost his phone that day,” he said. “They went back and found it laying on the ground.”

Magnolia Blues owner Carl Craig noticed Lewis when he shopped at the grocery store. He was usually out gathering grocery carts in the hot sun with a smile on his face.

“I’d seen him working at the Pig for a long time, and when he asked me if he could come work, I instantly said yes,” he said. “I saw that he obviously had a good work ethic.”

Craig said he never complains at work and doesn’t use his lack of transportation as an excuse for not showing up for his job.

Walters said about seven of her co-workers joined her in raising money for the surprise. Friday morning, they called Lewis to ask for his help moving some supplies for them. Even though it was his day off, he caught a ride to oblige. That’s just his way, Walters said.

While he was lugging the cardboard boxes, they asked him to step outside for a moment.

He walked through the door and spied a gold Camry parked in front, decorated with a large red and blue bow. His look was a mix of shock and confusion.

Walters greeted him with the keys and a hug.

“It’s for you,” she told the wide-eyed Lewis.

Lewis was speechless, but remembered advice his friend Kendra Jackson had shared.

“Like Kendra told me, God makes a way,” he said.