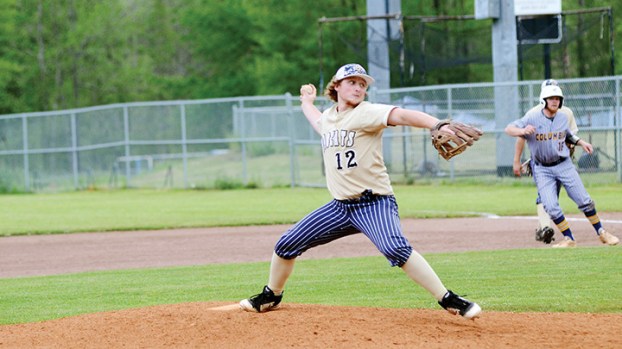 Photo by Dave Linton/Bogue Chitto senior Bryce Bullock rears back to hurl a fast pitch to the plate as he pitched relief during Friday night’s defeat to Columbia.

Unable to get their bats going, Bogue Chitto fell to Columbia 16-2 Friday evening.

“We just came out a little flat tonight,” said Bogue Chitto coach Gareth Sartin. “We weren’t ready to play, as well as we could’ve. Columbia has a good team and they were able to get some good hit and got things going. They made several hits that were just out of our reach to make outs on. We had chances to get a few big hits, we just couldn’t get them.”

Senior Trey Nettles scored Bogue Chitto’s first run of the game in the second inning on a balk call, before the Wildcats were able to get out of the inning.

The Wildcats added two runs in the fourth inning. With one out, senior Harrison Miller reached safely with a single. Sophomore Aiden Singley scored Miller on an RBI double. Senior Jace Smith scored Singley on an RBI sacrifice fly. Bogue Chitto was able to get out of the inning with a pop fly ball.

Columbia tallied three runs in the fifth inning. With two on and one out, sophomore Alex Morgan nailed an RBI double. The Wildcats would load up the bases and get a run in before Bogue Chitto could place the tag on the Wildcats junior Cannon Mock who got caught in a rundown between first and second base. Bogue Chitto got out of the inning on a pop up.

Trailing 8-1 heading into the bottom half of the fifth, Bogue Chitto attempted to rally. Sophomore Shaw King led off with a walk. Sophomore Ethan Gladden followed with a single. With two outs, junior Bryce Langley drew a walk, loading up the bases. The Wildcats prevented the Bobcats from scoring, getting out of the inning with a ground ball.

The Wildcats put the game away for good in their half of the sixth, scoring eight runs. Smith led off for Columbia with a single. Sophomore Javen Moses followed with a single of his on. With one out, senior Trey Hobgood reached third base on an error, which brought in two runs.

Columbia loaded the bases and got a run in off of a hit batter. With two outs, junior Reagan Davis hammered a grand slam. Smith would reach base again on his second single of the inning. Moses brought Smith in on an RBI double. The Wildcats once again loaded up the bases, but Bogue Chitto was finally able to stop the bleeding getting a fly ball out.

In the final frame of the sixth inning, Senior Tucker Lambert scored the Bobcats final run of the game on a leadoff home run.

Smith picked up the win for the Wildcats, going four innings while allowing three hits and one run while striking out five. Singley pitched two innings in relief.

Wesson shuts out Port Gibson — In only three innings, the Lady Cobras put down the Blue Wave to go…