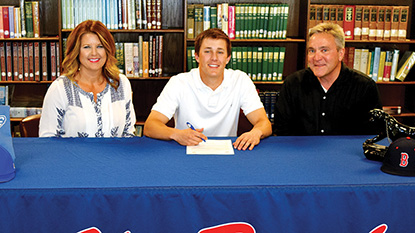 Clint Stephens is determined to play baseball at the college level.

“I’m going to find a way on the field — even if I have to stay and play catch in the coach’s back yard,” he said.

That won’t be necessary. The Brookhaven High School senior has had a prosperous season at the plate for the Panthers in 2018, and all that swinging paid off Wednesday when he signed a scholarship to play baseball for the Wolves of Copiah-Lincoln Community College next year. He’s looking forward to taking his bat to Wesson, where he’ll play an important role for a Wolfpack team making moves to reestablish itself.

“The Co-Lin coaches are real down-to-earth, and I like that they’re on the come-up,” Stephens said. “I’ve been an underdog my whole career, so I want to keep that going.”

Stephens may have been an underdog in the past, but his performance on the diamond this year has been strong. He’s batting .422 so far, and has driven in 20 RBIs on 27 hits, scoring 36 runs of his own. His on-base percentage is .554, and he’s stolen 15 bags.

As a fielder, Stephens’ percentage is .882, and he’s thrown 20 runners out and shared in 25 assists. He has turned four double plays on the season and seen limited action on the mound.

Stephens said Co-Lin is considering him for shortstop or outfield, and he’d be happy with either one.

“If you can hit, they’ll find a place for you,” he said. “You want to make an impact for the team, but my main goal is to start. The rest will take care of itself.”

He can hit, and he can absorb.

“Co-Lin is getting a guy who’s just gritty — one of the grittiest players I’ve coached in 23 years,” said Ole Brook baseball coach Matt White. “He wants to do his best all the time, and he’s just hard-nosed. He’ll put his teeth on the line to stop a ground ball, and he’s not afraid to take a hit at the plate.”

White said Stephens has emerged as one of the Panthers’ leading hitters over the latter part of the season. He leads the team in hits and home runs, is second in batting average and tied for second in runs.

“When he’s on, he really helps our offense get rolling,” White said.

Ole Brook has rolled to a 16-7 record this year, and entered the 5A playoffs with a three-game series against North Pike that began Thursday night.

“We knew he could hit, and we knew he was a good athlete. He’s a great person, and he’s got some great leadership qualities,” he said. “He’s got athletic ability, so he can probably play the bases at the college level. If he hits, we’re going to find a place for him.”

Co-Lin’s freshman class next year will be much more locally-focused, with Stephens joining other recruits from Bogue Chitto, Lawrence County and West Lincoln.

“Those local kids are our priority recruiting-wise,” Smith said. “If they can play college baseball and help us win games, we’re going to try to get them to come to school here.”

Who will win in the baseball playoffs? Gazing in the crystal ball at the diamond

North Pike vs. Brookhaven The Panthers claimed the No. 2 seed in the first round of the playoffs, and will... read more