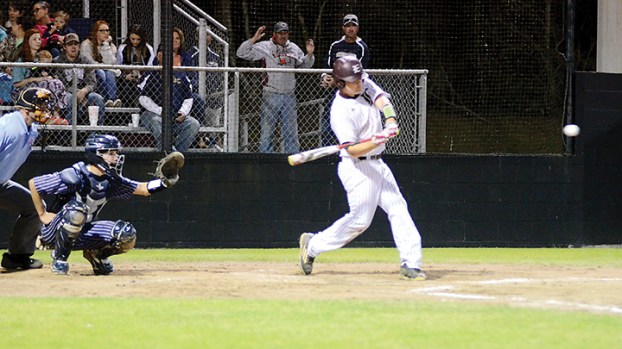 Daily Leader File Photo/Landon Gartman takes a swing in a game earlier this season. Enterprise will take on Enterprise-Clarke in the second round starting Friday.

Enterprise knocks off Pisgah in series — Yellow Jackets slay Dragons 10-8, 9-2 to advance to second round of playoffs

There was a moment Friday night where it looked that Enterprise was going to blow a 7-2 lead to Pisgah.

Having already surrendered four runs in the inning, the Yellow Jackets found themselves up by only one with a Pisgah runner at third base and only one out.

Hunter Richardson thwarted the rally, however, coaxing an infield popup and striking out the next hitter to preserve the lead.

Enterprise added three runs in the bottom of the sixth to push the lead to 10-6, and held on to win 10-8.

“These guys have fought all year,” Enterprise head coach Cass Brister said. “We’ve bounced back when we didn’t play well all year, and hopefully that continues going forward.”

Enterprise fell behind early in the contest, with the Dragons putting an unearned first inning run on the board after a Yellow Jacket error. Pisgah moved the lead out to 2-0 in the top of the second inning, scoring on a wild pitch with two outs.

Enterprise’s offense hit its stride going in the third inning, as sophomore John Burns launched a fastball over the left-field wall to tie the game at two.

Enterprise added four more runs in the frame behind RBI base hits from Landon Gartman, Colby Beard and Cade Feltus.

Pitching with the lead for the first time in the contest, Gartman began to settle in and retired the Dragons in order in the top of the fourth inning. He helped his cause in the bottom of the inning, notching his second RBI base-hit of the contest to push the lead out to 7-2.

“I was really trying to just get ahead of batters and throw strikes,” Gartman said. “I was able to throw my breaking ball into the strike zone consistently, and that helped.”

After both teams went scoreless in the fifth inning, Pisgah was finally able to chase Gartman from the game after he issued three consecutive one-out walks to give the Dragons some life.  Gartman would finish the contest throwing five innings and not surrendering a hit to the Dragons.

Richardson entered the battle, and after a hit-by-pitch, a wild pitch and a two-RBI triple the Dragons were only down one run late in the contest. Richardson got out of the jam, and the Yellow Jackets would add on in the sixth inning to come out victorious.

“I felt like we really hit the ball well tonight, and that’s a positive for us,” Brister said. “We had a few too many outs on the bases, and that hurt us and is something that’ll have to be fixed going forward.”

Senior Lake Burns pitched the seventh inning in relief, and picked up the save to move Enterprise to 1-0 in the playoffs. The Yellow Jackets finished the series off Saturday, defeating Pisgah 9-2 to set up a matchup with Enterprise-Clarke in the second round starting Friday.

The playoffs aren’t something new for the Lady Bobcats, having won 10 consecutive first round playoff games. As the Bogue... read more