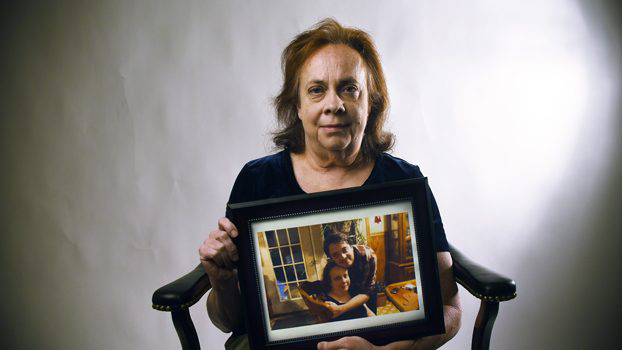 Celeste Jones holds a picture of her son, Jesse Jones, who died unexpectedly more than a year ago. She is still awaiting the state medical examiners lab to provide an autopsy report to learn what happened to him. (Nicole Hester, The Natchez Democrat)

NATCHEZ — More than a year after her son’s death, Celeste Jones still has no answer.

When 28-year-old Jesse Jones died unexpectedly on March 14, 2017, medical personnel suspected a pulmonary embolism, but she would not know for sure until a final autopsy report came back from Jackson.

That report has yet to come.

Celeste Jones is one of many affected by a heavy backlog at the State Crime Lab and Medical Examiner’s Office. In years’ past, each received a considerable dosage of budget cuts and a loss of staff, leaving the employees there with a monumental task.

In Jones’ case, what should take a few months at most has left her in limbo for more than a year, wondering what caused her only son’s death.

Jones said her son was visiting her in town while he applied for a job with the Vidalia Fire Department. During the trip, Jesse became stricken by pain in his back and one of his legs, then dizziness and nausea at a later point.

Then, Celeste said she heard a “thump.” Jesse had fainted.

An ambulance eventually showed up and transported Jesse to the hospital, where Celeste sat, not knowing what was going on.

The next thing she knew, a male nurse broke the news to her that Jesse was gone.

From that moment until now, she still is unable to tell people for certain what caused the death.

“People will ask, ‘What happened?’” Jones said. “I’ll say, ‘I don’t know. I still don’t have the death certificate yet.”

But Jones said her grief extends past a lack of closure.

Jones, who herself works in a lab at Riverland Medical Center, said she needs the final report to settle with a bank, from whom her son had taken out a loan for a vehicle he purchased shortly before he died.

“They’ve called every month asking, ‘Why don’t you have the autopsy report?’” Jones said. “I don’t have it yet.

Today, Jones said she still has no idea when to expect the report, even after a bevy of pleas to various state officials.

While lack of closure for family members and loved ones of deceased individuals is one of the most common consequences plaguing victims of the backlog at the State Crime Lab and Medical Examiner’s Office, the effects are seen in many different groups, Natchez Police Chief Walter Armstrong said.

“It runs the full gamut, from a law enforcement perspective, from a public safety perspective, as well as citizens needing closure,” Armstrong said. “And the public at large, because if there is a potential suspect running around out there, then law enforcement desperately wants to bring closure and arrest the suspect, but at the same time, we want to make sure we have evidence to affect an arrest.”

Armstrong said with the current staffing level at the crime lab and medical examiner’s office, the return of DNA can delay arrests by months. Even in cases in which the police are certain they have a culprit, their hands are tied until the results come back, meaning suspects get to bide their time on the streets.

Why can’t the crime lab fix this issue?

“The State needs to allocate more money in the Department of Public Safety’s budget for the crime lab,” Winters said. “That’s it.”

Winters said from his tenure as director, the budget dropped from $13 million in 2000 to $9 million in 2004, with not much improvement to speak of since.

The medical examiner’s office was eventually whittled down to just one pathologist to handle autopsies, and Winters said the office has no chance of adhering to recommendations for handling a certain caseload per year with that kind of staffing.

Workers should not handle more than 250 autopsies a year, Winters said. But the office on average handles more 1,500 cases annually.

The state has allocated approximately $1.2 million to the medical examiner’s office in this fiscal year — a more than 100-percent increase from last year — in an attempt to rectify the problem.

The additional funds to the medical office will not be available until July, but the department has begun recruiting prospects, Crime Lab Director Sam Howell said.

“We’re optimistic, we really are,” Howell said. “Compared to where we are and what we had available, if we are successful in creating some (job opportunities), that should make a tremendous difference in being able to provide services.”

Though he said the state crime lab itself did only received about $5,000 in additional funds, which would not deter its personnel issues, Howell said he at least sees a step in the right direction.

“I am very optimistic, especially with the medical examiner’s office,” Howell said. “Some steps were made this year for the crime lab. I’m hoping that the state’s (economy will) have an upturn from where we are now, and we’ll be able to adequately address those other needs in the future.”

Still, of all the problems within the crime lab, District Attorney Ronnie Harper said the issues in the medical examiner’s office are likely the most troublesome.

“Just getting autopsy reports … that’s been the biggest or most glaring problem that we’ve had in the last couple of years,” Harper said.

Because the 6th district circuit court convenes grand juries six times a year — spread out in two-month intervals — Harper said cases sometimes span two or three jury sessions before getting an indictment while the court awaits forensics from the crime lab.

Until the last year or so, Harper said, attorneys would consult private labs sometimes to make up for the shortfall in DNA analysts at the state crime lab, though Harper said he has seen that situation improve recently.

And as juries rely more and more on forensic science to make their decisions, Harper said, the more the potential effect of the backlog rises, even in what appear to be clear-cut cases.

“If you don’t have the autopsy, that’s pretty difficult to do.”

As evidenced by Celeste and Jesse Jones’ case, the waiting period for that final autopsy report can be extensive.

An average return can take between nine and 12 months in Mississippi, compared to a state such as Arkansas that has a wait of approximately 60 days, Adams County Coroner James Lee said.

The state also needs to look at advertising higher pay for crime lab employees, Lee said, as they make considerably less than their positions average across the United States.

“We, the coroners, are extremely concerned, because it affects everyone in the 82 Mississippi counties that depend on the crime lab for assistance in determining cause and manner of death,” Lee said.

Everyone including Jones, hopes the state continues to redirect funds to the crime lab.

“You don’t understand what kind of grief people go through,” she said. “You’re messing with people’s lives. And dealing with people in other states, it makes Mississippi look bad for being so behind on something like getting death certificates.”

But for now, 13 months after her son’s death, Jones and others throughout the state in her position can only do what they have been doing: wait and wonder what happened.

Experts: Gnats are bad this year for Southwest Mississippi

NATCHEZ — Yes, the gnats are bad this year, a couple of the area’s leading bug specialists say. “All... read more