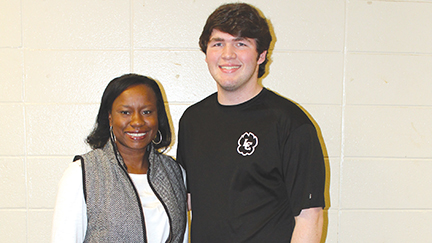 Lawrence County Cougar gets 34 on ACT to be a STAR

Konnor Battle’s competitive nature keeps him pushing himself to do better.

Battle, the 18-year-old son of Ben and Bridgette Battle of Jayess, is Lawrence County High School’s STAR student. He scored a 34 on the American College Test, which was combined with his scholastic average to make the determination. The Mississippi Economic Council M. B. Swayze Foundation sponsors the Student Teacher Achievement Recognition.

Battle took the ACT eight times, scoring a 34 on his last two tries. He needed a 33 to get full tuition at the University of Mississippi, but he wanted to see if he could do better. He took the test again Saturday.

“I thought I would give it one last try,” he said. “I just wanted to see if I could beat myself.”

He chose Alexander as his STAR teacher because she inspired him to pursue a career in the health field. He wanted to go into medicine, but a weak stomach limited his options.

After taking a medical survey, he realized pharmaceutical research is his passion. His hope is to one day work at Batson Children’s Hospital in Jackson.

“I absolutely love working with kids,” he said.

Alexander taught Battle in his sophomore and junior years.

“He’s the kind of student everybody would want to have,” she said.

She described him as competitive, but also acknowledged that he’s a team player who goes out of his way to help his classmates.

Alexander, a graduate of Lawrence County High School, started there in 2000 as a school nurse. She began teaching there in 2008.

She enjoys the chance to help students achieve success.

“I just try to help them and guide them to make a good career choice,” she said. “And to help them be prepared to get to college.”

The Lincoln County School Board will hold a special-called meeting May 1 at 5 p.m. in the central office on... read more