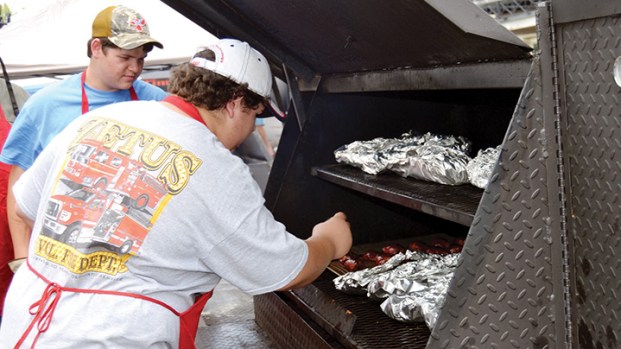 Local firefighters are hoping for good weather and hungry bellies next weekend for the eighth annual Hog Wild Family Festival and BBQ Cook-off in downtown Brookhaven.

The grilling starts early this year, with a steak cook-off May 4. Event organizer Mark Porter, a member of the Zetus Volunteer Fire Department, said the steak grill-off was added to generate more participation and attendance to the annual barbecue festival. Grillmasters and home cooks alike can compete for a $1,000 prize for the best steak. There will be a second place and third place winner as well. The steak cook-off participants are not required to participate in the barbecue competition. Entry fee is $100.

“If somebody just wants to come taste, they’re invited to do that,” he said.

Grillers will be judged by a panel picked for their taste buds and hearty appetites as well as by the general public.

“Turn in is at 7 p.m. As soon as everybody gets their steak turned in to the judge, we’ll open it up to the People’s Choice,” he said. “After that’s over with, of course the barbecue is on Saturday (May 5). We’ll be selling pulled pork and ribeyes.”

Ribeye plates will also be sold during the steak grill-off.

Porter said they’re bringing back some of the favorites like the kids corner with inflatables, live music and food vendors.

“It’s pretty much the same things we’ve always had, plus the steak cook-off and People’s Choice for steak Friday (May 4),” he said.

Porter said the goal of Hog Wild is to raise money for volunteer fire departments.

“We would like a lot more participants,” he said. “This is the eighth year, and it has grown tremendously over the past seven years so we hope this year will be even bigger and better. We’re looking for more participants and we hope to raise these fire departments a lot of money.”

Organizers raise about $20,000 each year, he said. The money is used for things like fuel to run the fire trucks, equipment purchases and repairs and maintenance to keep everything running.

Porter encourages the public to come out for the steak competition and the barbecue cook-off.

“It would be a good way to help raise money for maybe one of the fire departments that covers you, or really just to come help out. It will be a good event and I think everybody will enjoy it,” he said.

The Hog Wild BBQ Cookoff is an official Kansas City Barbecue Society event so it brings in professional grillers from all over the country, Porter said. There are also divisions for backyard cookers, for participants to compete against other small teams, and a youth division.

The cookoff is also a qualifying event for the Jack Daniel’s World Championship Invitational Barbecue Competition,  the American Royal World Series of Barbecue and the Sonny’s Smokin’ Showdown Invitation Barbecue Competition. First place winners in Hog Wild automatically earn a free entry into one of those events.

Porter said judges for the barbecue competition are certified through the KCBS.

Besides the food competitions, visitors to the festival can shop at the arts and crafts booths or try the typical festival fare at any of the number of food vendors Porter expects to set up in the parking lots downtown between Whitworth and Railroad avenues.

For applications for steak and barbecue competitions or vendor booths, visit www.hogwildfestival.org. For more information, call Porter at 601-757-1772.

A Brookhaven non-profit group is starting a community garden in the hopes two specific groups of people will come together... read more