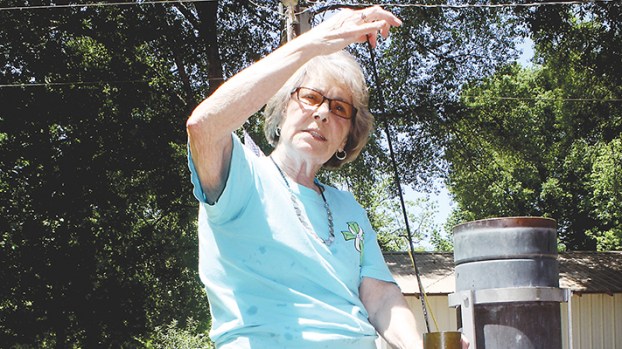 Photo by Adam Northam/Bertha Varnado takes a reading from her rain gauge Monday at her home in Union Church.

Thirty years in the rain, and counting — Union Church woman is recognized for three decades as observer of weather

In a world of doppler radar and computerized weather modeling, Bertha Varnado’s rain gauge is a relic of the old way.

It is 3 feet of weathered brass, turned gray as slate rock by 30 years sitting under open skies. It looks more like a cannon shell, or a length of stovepipe from an old-timer’s cabin than it does an instrument of science. She keeps it at the front edge of her flowerbed at her home in Union Church, between a sprawl of purple loropetalum and a single wild iris, its metal mouth open to the clouds above.

“I did relocate from one house to another and we got a new one, and it was plastic. But I said I didn’t want that one,” Varnado said. “I wanted that old one moved up here.”

Varnado, 83, has been checking the old rain gauge for 30 years, measuring the precipitation trapped in its deep belly with a metal yardstick and reporting her data to the National Weather Service in Jackson. The federal agency relies on weather observers like her to validate its computers’ predictions.

The NWS recognized her devotion recently by presenting her with a 30-year service award and its prestigious John Campanius Holm Award, given to cooperative weather observers for outstanding accomplishments in the field of meteorological observation.

“I don’t think I’ve missed any rainfall measurements in 30 years,” Varnado said. “Sometimes I might have fudged on turning in a trace if there’s not enough to even measure.”

The Holm award is given annually to only 25 of the more than 8,000 weather observers nationwide. The award’s namesake is a Lutheran minister who is the first person known to have taken regular readings of weather in America, recording his observations in colonial Delaware in the 1640s.

Varnado measures rainfall in Union Church dutifully, draping herself in rain gear and wading out underneath the mizzle of passing showers or into the bite of churning thunderstorms to drop her measuring stick into the rain gauge by 8 a.m. on any morning there has been rain.

The old gauge is a tube within a tube, and she has to disassemble the instrument and pour the contents of one container into another before the readings are accurate. An inch of measurement does not equate to an inch of rainfall, and the gauge is designed to hold an accurate, measurable volume in hundredths of inches.

Varnado got into the weather-watching business with her husband, the late Rayford Varnado, in 1987. He owned a general store in Union Church and she worked for the USDA, in what is now the Farm Service Agency, until her retirement in 1994.

The store burned down in 2004 and Rayford passed on in 2005, but Bertha kept right on measuring and reporting.

“I knew how important the weather and the rainfall is to farmers. It can make or break them,” she said. “And, you know everybody wants to know, ‘How much rain did we get?’ That was always a subject at the store. I go to the post office every day to get my mail, so now that’s usually the place for someone to ask about how much rain we got last night.”

Varnado said she plans to keep on observing for the NWS as long as she is able, and that could be a long time. She is mighty spry for 83, solid on her feet and quick in her mind — she stores history like a librarian and commands the language like an English teacher.

She does not really care for the recognition she has received. Thirty years of accurate weather observation was not a hobby or a sport, and she does not feel it really warrants celebration. She is not sure where to hang the awards.

“It’s on a little table, right beside my back door,” Varnado said. “I don’t know what I’m going to do with it. It’s bigger than I thought it was going to be.”

Varnado said she has remained a soldier for the NWS for three decades because weather observation is a task that needs to be done.

“I grew up on a farm, and whatever your job was, you did it to the best of your ability,” Varnado said. “It’s just one of those things you’ve been taught since childhood. You have a job, you do it.”

Latrice Maxie, leader of the NWS observing program, said Varnado’s commitment and dedication has been critical to accurate weather forecasting, and the seemingly small job of measuring rainfall totals may even save lives. Data from Varnado and other observers is used to build flood forecast models, and the NWS fulfills its mission of protecting life and property by predictions based on those models.

“We need the troops,” Maxie said. “You can only get so much from computer models, and even the radar at times. You need those ground troops to support and verify what you’re seeing on the models.”

Elementary and middle school students in Brookhaven will have to hit specific numeric goals in reading and math to advance... read more