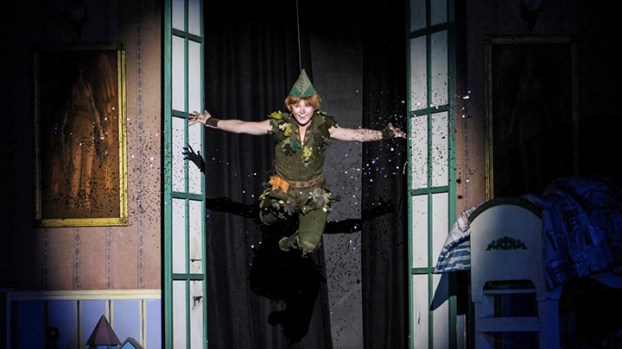 Editor’s note: The Daily Leader’s Lifestyles section was not included in some copies of this past weekend’s edition. This story is reprinted.

With the Brookhaven Little Theatre performing what is sure to be its most complicated performance ever, “Peter Pan,” it is on track to break all presell online ticket sales records and is forecasting every performance to be a sold out show with walk-ups included.

Two more performances were added the schedule — a Thursday night and a Saturday matinee.

Many talented and artistic people have been assembled to make “Peter Pan” something to remember.

Musical director Tonya Matthews was the first person that came to mind for Waterloo when it came to finding someone with musical ability and knowledge to help make the cast sound professional.

“This was my first experience helping out with actually putting a show together here at BLT, I’ve only ever been an audience member. But I was asked to be a part of it and was incredibly excited to be asked and I’m happy with what we have done with it,” said Matthews. “Being a music major at Ole Miss I do have experience with vocal coaching and teaching music and I was very happy to be asked to come and help because I love the theater so much.”

The music and sound had been nailed down with a great addition to the team with Matthews coming aboard. But the next question to be asked was could these performers sing while performing rigorous choreography? That question went to the choreographer that was brought on, BLT veteran Taylor Berry.

Berry has choreographed a number of performances through the BLT years and with early showings and viewings of the numbers in “Peter Pan” they once again made the right choice by bringing her back.

“With this being my sixth show choreographing and having come off of the spring musical last year ‘Mary Poppins’ there were a lot of differences between that show and this show,” said Berry. “With ‘Poppins’ I wanted to be as straightforward as possible: jazz, tap, contemporary, etc. but with Pan it’s very different. You don’t think dance when you think Lost Boys, Indians, and pirates. You strive to tell a story but want each person to play those individual characters. So it’s not as formal.”

Finally, as far as the behind the scenes crew is concerned, someone was needed who was passionate enough about theater and the arts and also seasoned enough to take on such a big project. That is why Trey Waterloo — director of last year’s “To Kill a Mockingbird” — was the ideal choice. With Waterloo also being a seasoned veteran of the BLT he was lacking in one area, he hadn’t tackled a musical in his time there.

“Taking on a musical was very nerve racking to me. I hadn’t studied music, I hadn’t learned sheet music or the combination of melody and harmony so I really had to focus on assembling a team that could help me do this and they have all been fantastic,” said Waterloo about his team.

Waterloo was up for the challenge when he was asked to direct this spectacle — mainly because he was excited and striving to see what new things we could add to the BLT with this performance.

“Patrons of the BLT can definitely expect to see things in this show that have never been seen before at our theater. You can expect flying with a new flying statue, you can see a stage presence and utilizations that really tie everything together to make it great,” added Waterloo.

The music was set. The choreographer was set. The metaphorical “captain of the ship” had been set with Waterloo as director. It had now come down to finding out who would help bring these popular characters to life — the cast.

Traditionally in the Broadway performances of “Peter Pan,” the role of Pan is played by a teenage girl, and in keeping with tradition that’s what happened here as well. MaryRhea Waterloo had the privilege and responsibility of being cast in the role of the “boy who never grows up” and to no one’s surprise she surpasses expectations and brings something wonderful to the role.

“Peter Pan is a very physical and active role so to prepare for it I rewatched a lot of the character work that Johnny Depp does in his movies,” said MaryRhea about her research and prep for the role. “The toughest part has been trying to channel that 12-year-old boy behavior because I am a girl playing a boy so there is that challenge to face.”

With every hero there has to be a villain to spar with, and the world knows that where there is a Pan there’s always a Hook chasing after him. In BLT’s performance the role of Capt. James Hook is being portrayed by Austin Showers, who is no stranger to the BLT stage either. He most recently played Motormouth Maybelle in the BLTeens production of “Hairspray.”

When reached for comment about the differences between playing a woman and playing a ship captain, Showers said, “This is the first villain and antagonist I’ve gotten to play so comparing the two, you have to completely switch gears at how you play it. It’s almost like I’m playing the anti-Maybelle.”

With Showers cast as Hook, the challenge of finding a solid first mate portrayal of the lovable Smee came as an easy one when they landed on charismatic and great character actor Jesse Carlile to balance out the intensity of Hook.

“I did a lot of research when it came to how I wanted to play Smee because there are so many renditions of the character. From the Disney version to the Cathy Rigby version originated on Broadway and everyone in between. I wanted to do my best to blend all of them into one general performance,” said Carlile. “Playing off Austin has also really helped me shape the character. He’s a great Hook so I really had to make my character match his persona to a point where our partnership had to look believable.”

The story of “Peter Pan” would be a dull one if you did not have the incredible young talent that is present on the stage. No other three children do that statement justice than the three cast as the Darling children who accompanied Peter to Neverland for a heap of adventures. Emmaline Wolfe plays the metaphorical matriarch Wendy Darling; Jacob Rutland plays the middle child John Darling; and Gigi Fitzsimmons plays the huggable baby of the three, Michael Darling. All three actors are relatively fresh to the BLT stage but are taking on the roles as if they were born to play them.

“I’m the oldest child in my family so it was fairly easy for me to jump into this motherly role.” said Wolfe.

Rounding out the lead cast of the show is Lucy Donegan, who plays the supporting but scene-stealing and pivotal role of Indian Princess Tiger Lily. Donegan has been in several performances over the years and has portrayed a variety of characters. From Tracy Turnblad to Gertrude McFuzz in “Seussical,” Tiger Lily falls right in the middle of those characters, Donegan said.

“She’s very fierce,” said Donegan about her character. “She’s very fierce but also acts in a motherly role to her fellow Indians. She wants to make sure her Indians are taken care of first and is very selfless in all her actions.”

Remaining show dates are Thursday-Saturday  at 7:30 p.m. and matinees Saturday and Sunday at 2 p.m.

The low bids for city and county garbage pickup contracts were turned in Tuesday by two different companies, and it’s... read more