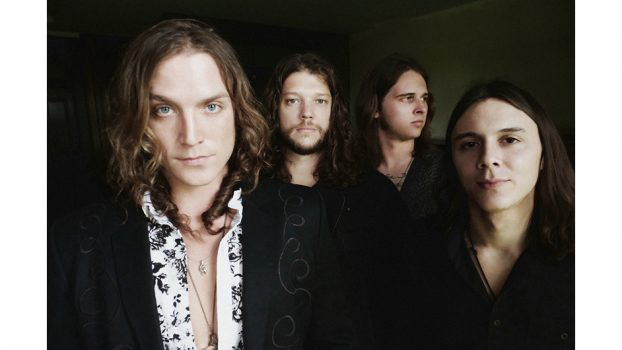 From left, Bishop Gunn members Travis McCready, Ben Lewis, Burne Sharp and Drew Smithers. The band will debut its new album under the title of the city that raised the band members: “Natchez.” The band also organized the Bishop Gunn Crawfish Boil, taking place Saturday, May 12 on the Natchez bluff. (submitted photo)

NATCHEZ — Just three years after coming together for the first time, local band Bishop Gunn has dedicated its first album to the town that raised its members: Natchez.

The band was born under the glow of hot-air balloons; the first time they played for a crowd was in 2014 at the Great Mississippi River Balloon Race.

Every part of the music — which McCready tentatively categorizes as “rock and soul” — is influenced by the rich history of Natchez, the vocalist said.

“It’s hundreds of years of history in a word,” McCready said. “When we say ‘Natchez,’ it’s not just the 300-year history of the city. It’s the American Indians and the Trace and all the music that’s come out of that area.”

The video for “Shine,” a single released ahead of the album, was filmed entirely in Natchez. You can see the video at natchezdemocrat.com.

Before joining a band, McCready did metal work for several years here in Natchez.

For the video, McCready said he returned to some of the same places he used to know so well and even met with one of the men who knew him as a metalworker.

“The song, you know, it says, ‘Shine that light on me; I’ll sit and tell you my story,’” McCready said. “It’s supposed to focus on the working man and the stories they have to tell.”

To illustrate these inherently Natchezian stories, McCready said the band chose to use people who live here in the video.

“It was great,” McCready said.  “We only got turned down one time.”

The music itself is a twangy, deep-throated mixture of Otis Redding and Led Zepplin, Houndmouth and The Allman Brothers Band. Even McCready said he finds it difficult to put their sound in one genre.

“Somebody called it ‘rock and soul,’” McCready said. “I kind of agree. It’s like rock and roll with a soulful delivery.”

The only song on the album is noticeably named after a Natchez location is Silver Street.

“It’s the story of a dangerous situation — a gunfight kind of thing,” McCready said. “But it’s thinking of the history of all the things that happened down there (on Silver Street). It was a dangerous spot.”

The album, McCready said, furthers the band’s goal of “carrying the flag” for Natchez.

“We’re from there and played there,” McCready said. “We had to leave Natchez, but we’re just up the road, really. We’re really proud of that name.”

The band will celebrate its album in an upcoming show on Saturday, May 12, at the Bishop Gunn Crawfish Boil on the bluff in Natchez. Tickets are available on the band’s Facebook page.

ONWARD — The story of President Theodore Roosevelt’s Mississippi bear hunt that served as the inspiration for the teddy bear... read more