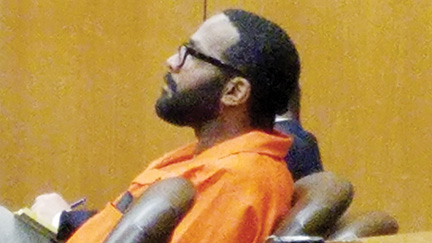 The bright orange jump suit accused murderer Willie Cory Godbolt wore into the Lincoln County Circuit Court Thursday — as well as the shackles that held his wrists to his waist and his ankles together — became the topic of conversation between the defendant’s court appointed representative and the assistant district attorney.

Godbolt is accused of shooting to death eight people in three locations in May 2017. The victims were Lincoln County Sheriff’s deputy William Durr, 36, of Bogue Chitto; Barbara Mitchell, 55, her daughter, Tocarra May, 35, and Mitchell’s sister Brenda May, 53, all of Bogue Chitto; Jordan Blackwell, 17, and his cousin Austin Edwards, 11, both of Brookhaven, and Sheila Burage, 46, and her husband Ferral Burage, 45, of Brookhaven.

Godbolt made a 17-minute appearance in court Thursday for a status hearing before Circuit Judge David Strong.

He did not speak as he sat just a few feet away from the deputy’s mother, Debbie Durr, who was flanked on either side by her daughter-in-law, Tressie Durr, and her daughter, Megan Durr Cook. Other victims’ family members filled the rest of the row, spilling onto the one behind it.

Godbolt’s attorney, Alison Steiner with the state public defender’s office, made her first appearance as the defendant’s counsel. She asked if Godbolt might be permitted to wear civilian attire anytime he is in the courtroom.

She said Godbolt’s is an “extremely unusual case” with “high public interest” and media coverage by television and newspaper, so she’d like for him to be able to ditch the jumpsuit in favor of civilian clothes. She suggested the defendant change into clothes brought to the courthouse by his family and that he change in the presence of security officers.

She was concerned that his photograph in the orange jumpsuit will be broadcast to potential jurors through the newspapers, television and social media.

“If someone puts this on social media, that cat’s out of the bag,” Strong said. “There are numerous hearings where Mr. Godbolt has appeared on television in orange jumpsuits. And there’s nothing we can do to stop people from putting it on social media although, obviously, the court would discourage any such behavior.”

Strong told Steiner he anticipates she will file a motion for a change of venue.

“It’s my personal belief the jury will have to be chosen from an area that does not get any part of Jackson news,” he said.

Assistant District Attorney Brendon Adams said that it is a security risk for Godbolt to wear regular clothes rather than an orange jumpsuit. He said he had consulted with Lincoln County Sheriff Steve Rushing and it was the sheriff’s recommendation that Godbolt wear the jumpsuit for court hearings.

“Before a jury, that’s a completely different ball game,” he said.

As part of the status hearing, Adams said the state has turned over all discovery it has. There are still four autopsies that have not been completed by the state medical examiner’s office, he said.

He also asked for blood swabs to be taken from the defendant so that blood found at the East Lincoln residence — the third murder scene — can be compared to Godbolt’s. Strong allowed it.

Steiner asked the double shackles Godbolt wears be removed at his wrists so “he can hold a pen and take notes” when she meets with him. She also requested periodic status reviews — however, Strong said there will not be a reason to meet again until August.

Another status hearing is set for Aug. 2 at 1 p.m. He said he will revisit the shackles request then.

The Brookhaven School District’s adherence to state laws for special needs students was called into question Thursday during the second... read more