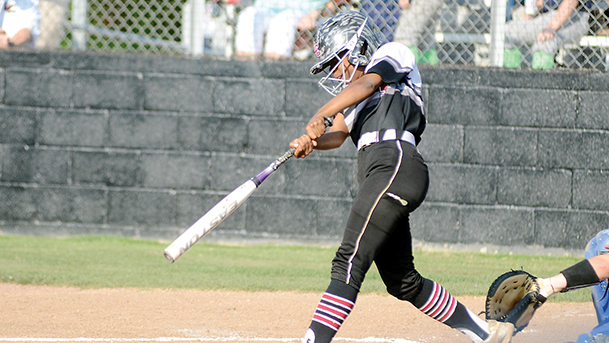 Photo by Collin Brister/Tyranesha Davis had a two-out single in the bottom of the eighth inning to tie the game at 2-2.

It could have been easy for Lawrence County to panic on Monday night when the Cougars fell down 1-0 in the top of the sixth inning in game three, after getting dominated in game two against Newton County.

It would have been understandable if the Lady Cougars freaked out after the bottom of the sixth inning when the umpiring crew blew a call and cost them a run that would have tied the game.

At no point did that happen.

Lawrence County was the loosest softball team I’ve ever seen, and that didn’t change throughout any of the 17 innings they played on Monday night.

Not even in the bottom of the eighth inning when Tyranesha Davis came up with a runner on third and two outs down by one run, where she had to get a hit to extend the season.

Newton County called a mound visit only an out away from advancing to the state championship series, and sending the Cougars home for the season.

During the visit, Davis and the Lawrence County head coach were dancing along to Lil Boosie’s “Do The Ratchet” playing over the system.

Davis was about to hit in the biggest at-bat of her life, and there her and Howard were down the third base-line jamming out to Lil’ Boosie.

Then Davis got a hit that tied the game up, and the Cougars would score in the bottom of the 10th to win the game and move on to the state championship game.

There’s something to the fact that during what could have been a nerve-wracking moment for the senior, that it wasn’t. It was just another at-bat, and Davis made it just another at-bat. And that’s why she singled and extended the game.

Baseball or softball isn’t a game that you can play tight. Swings get choppy, and pitches fly up in the zone if you’re pressing. It’s virtually impossible to play the game successfully if you’re tense or pressing.

Lawrence County, for 17 innings on Monday night, was the farthest thing in the world from that. They always believed that they’d get the job done and advance to the state championship series, even when they were down to their last strike.

And maybe Boosie had something to do with that.