There at the end, after all the doctors had come and gone and the machines and medicines had failed, her tired lungs finally had to quit, and Braylin left the world.

But she still lives, and breathes, through her foundation.

Braylin Breathes, a non-profit organization formed by the family of the late Braylin Case, is hosting its first community-wide fundraiser next month to begin raising money to help with end-of-life costs for the families of children suffering from cystic fibrosis, the genetic disease that led to Braylin’s death from respiratory failure on March 8. She was 8 years old, and the fundraiser — Braylin’s Birthday Bash — will take place on June 16, her ninth birthday.

“I don’t want anybody to have to worry about finding the money to bury their child,” said foundation president Paula Reeves, Braylin’s mother. “It is definitely tough burying your child, and you shouldn’t have to worry about scrounging up money. I want to be able to help somebody else going through that.”

Braylin’s Birthday Bash begins at 9 a.m. at the Lincoln Civic Center’s arena and will feature all the attractions of a spring festival. There will be fun jumps for children, door prizes, an auction, live music and food and retail vendors. Anyone who fancies themselves a champion beanbag tosser can compete in a corn hole tournament, and raffle tickets are being sold for a Smith & Wesson .38 revolver. Admission is free.

Foundation vice president Alaina Bedson of Natchez, Reeves’ sister, said the non-profit rules require any balance of more than $3,000 to be spent before the end of the year, so Braylin Breathes is looking to push out every dollar to families.

“We will help as many families as we can,” she said. “The first thing you do when you lose a child is walk into a funeral home — that’s bad enough — and then they say, ‘How are you going to pay for this?’ The Braylin Breathes foundation is going to cut a check, and we’re going to take care of it.”

The foundation has already helped with the burial expenses of two children who passed away with cystic fibrosis, one in North Mississippi, another in South Africa. Reeves said she learned of the South African family on social media and used some of the leftover cash from Braylin’s GoFundMe account — which started the foundation — to help them.

“It’s not fair. It’s not their fault,” she said. “It’s not something we choose.”

Plans for Braylin Breathes call for any money left after assisting families be donated to cystic fibrosis research. Advancing the science behind cystic fibrosis treatment is important to Reeves — she has two sons, 7-year-old Brayden and 6-year-old Sawyer, and Brayden also has the disease. She said Brayden takes medicine to control his liver enzymes and a new therapy designed to treat the genetic cause of the disease.

While Braylin’s condition worsened, Brayden has remained well, though Reeves said his sister’s passing has been hard on him.

“He talks about missing her and that he’s never going to see her again. We talk a lot about heaven,” she said. “Braylin wanted to be normal. I feel like her leaving Earth and not being sick anymore — because she was sick a lot — that’s her being normal.” 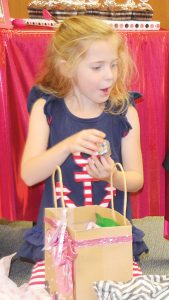 Wesson: Reaching out for a cold one? Annexation toward Brookhaven could allow vote on beer sales

An expansion of the Town of Wesson’s city limits may lead to future economic development — the kind that’s sold... read more