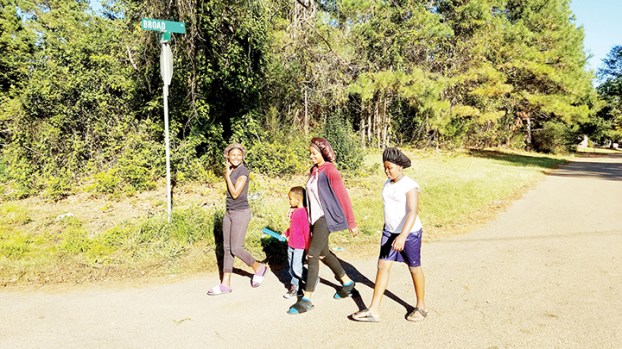 File photo A group of children in the Brignall neighborhood pass a vacant lot in November that will soon be transformed into a community park.

The littered, overgrown lot at the corner of Broad and Ellis roads in the Brignall neighborhood will soon become a suitable green space for families to picnic and kids to play — if a Brookhaven alderman gets his way.

Ward 1 Alderman Dorsey Cameron, Mayor Joe Cox and city engineer Mike McKenzie will meet Tuesday at 11 a.m. at the Habitat for Humanity of Lincoln County boardroom to go over possible plans for a park. The meeting is open to the public, Cameron said. Habitat’s office is on South First Street across from the Lincoln County-Brookhaven Government Complex.

Habitat donated the vacant lot — large enough to build two houses with yards — to the city in November. The organization purchased the land from the city several years ago for the cost of back taxes, with the expectation volunteers would be able to build homes there. But they couldn’t find a homeowner “who was quite the right fit,” Habitat executive director Suzanne Smith said last year.

The lot has been vacant for about 20 years and was overgrown and littered with cans and broken glass. The city cleaned it up and contractors took down some trees. Cameron wants to continue with work on the park. He’d like to see a basketball court and picnic tables first, then later a pavilion and playground equipment for children.

“It’ll be a park for the kids to play, a picnic area, a place for the community to come together,” he said last year.

Several banks have gotten on board with helping fund the project, and Cameron is looking for grants to pair with the donations. Anyone who wants to help create a community park in Brignall can call city hall at 601-833-2362 or attend the meeting Tuesday.

Phase 1 is expected to cost $75,000, Cameron said. That’s a pavilion, public restrooms and a basketball court “to get the park dressed up to look like a park,” he said. Phase 2 will include lights.

“We’re just going forward as best as we can,” he said. “It was just an overgrown lot that was an eyesore to the community. Now it’s going to be something nice for the kids to play, and have picnics and have birthday gatherings for whoever wants to be a part of it.”

There at the end, after all the doctors had come and gone and the machines and medicines had failed, her... read more