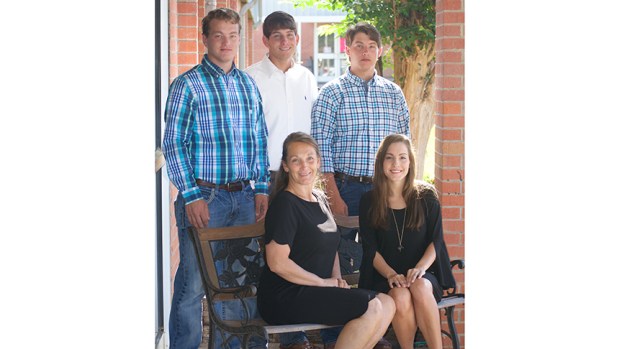 Photo by Donna Campbell/Four of Gwen Brister’s children — all born on the same day — will graduate soon from Loyd Star. Pictured with Brister are, from left: Bryson, Blayne, Brantley and Madisyn.

As a mom of seven, Gwen Brister’s big day is Sunday. But with four of the crew graduating from Loyd Star next week, May 18 will be a pretty momentous occasion as well.

That means there will be four caps, four gowns, four diplomas and lots of tears and hugs Friday.

The quadruplets have big plans after graduation.

Bryson is valedictorian of the graduating class. As STAR Student, he is getting a full ride to the University of Southern Mississippi and plans to study pre-med.

Madisyn, only a point or so behind, is salutatorian. She’s headed to Southwest Mississippi Community College for two years, then head to Mississippi College. Her goal is to become a physician’s assistant.

Brantley, graduating with honors, is also headed to Southwest and wants to become a nurse.

Blayne, also a an honors grad, is going to Copiah-Lincoln Community College and then Mississippi State University for an engineering degree.

Medicine is a common theme among the Bristers. Mom is a radiation therapist traveling to several hospitals, dad, Drew, is a physical therapist assistant in Tylertown. Older brother Brendyn is a nurse at Southwest Mississippi Regional Medical Center.

“We always told them they had to have a good education and get a good job and they always competed against each other,” Gwen Brister said. “We made sure thy were well-rounded with school, church, sports and other activities.”

The younger two Bristers will have several pairs of big shoes to fill.

“I think they all strive to do as well as the next one,” she said.

All but Bryson will be staying at home with mama in the seven-bedroom home in Bogue Chitto. The couple lived in Loyd Star when Brendyn started school and when they finally bought land — in Bogue Chitto — they wanted him to continue at Loyd Star. Six children later, the family is still Hornet-proud.

Brister said it will be odd not having Bryson at home.

“They’ve never been apart, and until this year, they’ve never not had a class together,” she said. “They’ve already told him that if they need help in school they’re going to drive over there for help.”

She said all of the children have a drive to be successful and have helped each other to get to the top of their class. They do their homework together and encourage one another, though there’s always room for some good-natured ribbing.

When Madisyn asked for help, Bryson joked with her.

“He said, ‘I can’t help you because you might make a better grade,’” she said.

A sense of humor, a volunteering spirit, and a mature focus on the future is something they likely learned from their mother.

They’ve also learned to never give up.

“She always tries,” Blayne said. “Everything she does, even though it’s impossible, she always makes it happen.”

Madisyn is grateful for their mother’s generous, nurturing nature.

“She makes sure that we have everything we need every day,” she said.

Bryson pinpoints what makes their mother so special.

“She tries to do everything she can for us,” he said.

Brantley, not to be left out, tries to come up with a compliment. He looks at his sister and brothers.

“Y’all already said everything,” he said.

She doesn’t need compliments and doesn’t expect them.

“I’m the kind of mother, I don’t really like a big fuss over me. I’d rather do for them,” she said.

Her Mother’s Day will be spent at home with her husband and seven children, along with her mother, mother-in-law and an aunt. Their tradition is to have a  potluck lunch after church.

Instead of store-bought gifts, Brister wants sweat from her crew. They usually work in the yard or clean house for her for the big day.

“They’re always good to do whatever I ask them to do,” she said.

Brister said she and her husband didn’t intend to have a large family. It just happened. And she’s glad.

“It really hasn’t been as hard as you would think,” she said. “You stay so busy you don’t think about what you’re doing. You just do it.”