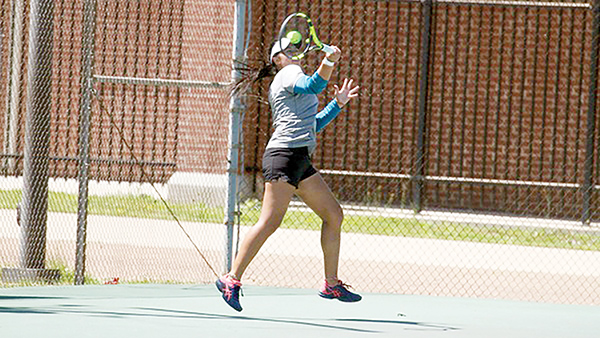 “I’m pleased with how we did at Nationals going 5-5 overall, which is a lot of tennis in four days,” said Co-Lin tennis coach Brenda Smith. “We competed against the best in the nation and grew as players. Carmen (Manicea) played extremely well as she showed steady improvement all year. Ximena (Daza) closes out her career at the highest level, which is appropriate for all she’s given to Co-Lin tennis.”

In No. 1 singles action, Daza dropped her opening round match to Kristela Vidnere of Cowley County Community College (Kansas) 6-0, 6-1, but fought back in round 1 of the consolation bracket defeating Elizabeth Towell of Waubonsee Community College (Illinois) 8-0. Daza made it to the semifinals of the consolation bracket falling to Yana Goranova of North Central Texas College 8-3.

At No. 2 singles, Manicea won her opening round match defeating Jennifer Hundsnurscher of Laredo (Texas) 6-0, 6-2. She fell in the main draw to No. 7 seed Mariam Mujawimana of Seminole Community College (Oklahoma) 6-0, 6-0 in the round of 16.

In No. 1 doubles action, Daza/Manicea fell to the No. 8 seed Rey Caipa/Tillinghast Cowley County 6-4, 6-2 in the opening round. They bounced back in the consolation quarterfinals defeating Misiek/Henderson of Lake City Community College (Illinois) 8-0 before falling in the semifinals to Cartmill/Torregrosa of Barton Community College (Kansas) 8-4.

“The future is bright as this year’s team went 10-3 on the season, made a trip to National (first since 2003), and returns five of seven players,” said Smith. “We have another Columbian coming in this fall and some promising Mississippi girls, too. Co-Lin women’s tennis is back where it belongs.”

Bogue Chitto got off to a hot start in their first game of the Lincoln County spring jamboree Friday, and... read more