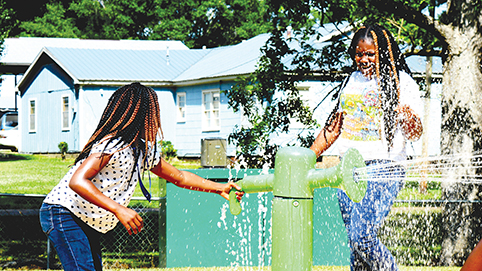 It’s hot, but not as hot as it could be — Record temperature for Brookhaven is 109 degrees, recorded summer 1901

It’s hot in Brookhaven already — you can thank a low pressure system coming off the Gulf of Mexico for that — but this may be as hot as it gets this summer.

Meteorologist Nicholas Fenner with the National Weather Service in Jackson said Brookhaven this week has already seen temps smacking at 90 on the thermometer.

“It’s pretty unusual this time of year to be getting those kinds of temperatures,” he said.

But it’s not a precursor of what’s to come.

He said it should cool off as the area sees increasing chances of rain going into next week. Rain will wet the soil which evaporates and creates cloud cover. That makes it cooler, he said.

Fenner expects May to have highs of 80 to 85 degrees and lows in the low 60s. For the peak of summer, around July and August, highs will be around 90 and lows around 70.

So what do you do to cool off when it’s hot and humid?

Matt Shell, director of the Brookhaven Parks and Recreation Department, suggests cooling off in one of the three splash parks — Bethel Park on Fulton Street, Bi-Centennial Park on Main Street and City Park on Hartman Street.

“They’re open nine hours a day seven days a week and they’re a great way for kids to cool off,” he said. “There are pavilions there by each one of them where parents can sit and watch the kids.”

It’s mostly the youngsters who can be found splashing in the jets of water shooting out of the ground, but there is no age limit.

“Anybody can go in there and get in them,” he said. “I’ve seen adults in them. They’re very popular.”

If splashing on pads isn’t your thing, there are two pools available — Brookhaven County Club and Brookhill on Natchez. Both pools are open anytime to members, but non-members can also take advantage of the coolness for a fee.

For those who want to beat the heat at home, your electric company will likely have several billing options to fit your budget. Southwest Electric offers variable monthly billing which calculates and averages the last 11 months of use plus the current month’s use providing a levelized current bill. This option helps their customers — or members — avoid the surprise of a larger bill during the hot summer months.

“Fans cool people, not the air. Running ceiling fans when you are away can only add to your electric bill,” said Les Southerland, member services supervisor. “Some other tips are setting your thermostat at 78 degrees and replace air filters monthly. Spring is a good time to perform the recommended yearly maintenance on your HVAC system. Also, closing your curtains and blinds during the day will block the heat from entering your house.”

Another tip is to replace old light bulbs with LED bulbs. They generate less heat and use less energy. Also, plant trees and shrubs to shade the exterior of your home.

He doesn’t golf anymore. That may not be a bad thing. Mike Whatley has sponsored a team in the four-man... read more