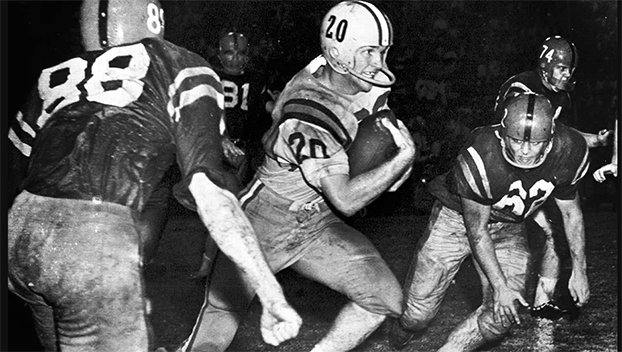 BATON ROUGE, La. (AP) — Billy Cannon, the gifted running back who won the Heisman Trophy for LSU in 1959 with a memorable Halloween night punt return touchdown against Mississippi, died Sunday. He was 80.

LSU said Cannon, the school’s only Heisman winner, died at his home in St. Francisville. The cause of death was not immediately known.

Cannon led the Tigers to a national championship in 1958 and won the Heisman following year, highlighted by his tackle-breaking 89-yard punt return that beat Ole Miss 7-3.

“Nearly 60 years later, Louisianans still talk about that Halloween night,” Louisiana Gov. John Bel Edwards said. “Billy’s legacy at LSU will live on for generations, and every time we enter Tiger Stadium, we’ll remember the impact he left on the players and fans who came after him.

Cannon went on to a successful pro career with the Houston Oilers, Oakland Raiders and Kansas City Chiefs, and became a dentist after retiring from football. But life after football was far from smooth. He served 2½ years in federal prison for counterfeiting in the mid-1980s after a series of bad investments and debts left him broke.

He was inducted into the College Football Hall of Fame in 2008, though it came on the second time he was voted in. The first time was in 1983, but the honor was rescinded because of his legal issues. After leaving prison, it took Cannon a while to put his life back together. He eventually was hired to be the dentist in the Louisiana State Penitentiary. His efforts at the prison were credited with restoring quality care for the inmates. He served as the dentist at the prison until retiring in January. The inmates would call him “Legend.”

“It’s the old penthouse, outhouse story,” Cannon said at his Hall of Fame induction in 2008.

As a football player, there was almost nothing but glory for Cannon.

The Philadelphia, Mississippi, native was a standout on both sides of the ball for LSU as a sophomore in 1957. As a junior, he passed for a touchdown and kicked the extra point in the Tigers’ 7-0 Sugar Bowl victory against Clemson, capping LSU’s first national championship season. He finished third in the Heisman voting that season.

“Billy Cannon was LSU football through and through. He was a legend. He will be missed and never forgotten,” LSU football coach and Louisiana native Ed Orgeron said in a statement.

Cannon was an overwhelming choice as the Heisman winner in 1959, when he also was named Associated Press player of the year, and followed that up by being the No. 1 overall selection in both the AFL and NFL drafts in 1960. LSU retired his No. 20 jersey.

“Today is profoundly sad for all of us. We know the thoughts and prayers of so many who were touched by my father’s life are with him and with us,” the Cannon family said in a statement released by LSU. “There are no words to express how grateful we are for the outpouring of support from all over the country. It is overwhelming and comforting.

“LSU meant more to our dad than anyone could ever know. It wasn’t the awards or the acknowledgements on the football field. It was always the love of the LSU family that meant the world to him and to all of us. There is simply no other place on earth where so many come together to love and support their own like LSU. His life was intertwined with the purple and gold, and he wouldn’t have had it any other way.”

Cannon began his pro career with Houston of the AFL and later played for Oakland and Kansas City, retiring after the 1970 season. His career included a Super Bowl loss with the Raiders at the end of the 1967 season. He also won the first two AFL championships with Houston in 1960 and 1961, and was named the title games’ most valuable player both times.

HAZLEHURST  (AP) — Police say a man has been killed and seven people were injured in a nightclub shooting in... read more