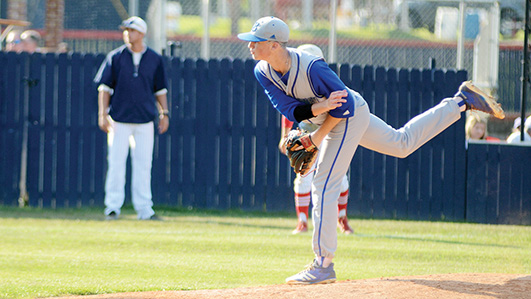 Sure, the game wasn’t technically over until Friday when O’Neil Burgos stepped on first base and doubled off a Tri-County runner to end the game in a 14-4 Brookhaven Academy victory, but it was over long before then.

See, when you focus your fight on when or how games are going to be played, you’ve already lost mentally. You don’t believe you’re good enough to win when you’re forcing games that have no business being delayed, to be delayed.

And when you’re beat mentally in a sport as mentally taxing as baseball, you might as well not even show up to the field.

It didn’t matter that the Cougars fell behind in the first inning to the Rebels. As soon as Brookhaven Academy took the lead in the top of the third inning, the game was over. Tri-County was already beat once things didn’t go their way with their ace on the mound in game two.

They went on to add six more runs that inning to take a 9-2 lead they’d never relinquish en route to their first baseball state championship since 2010.

What was most impressive about the Cougars for the six weeks I’ve covered them is they never quit coming on the offensive end.

From the leadoff hitter Brady Spring to the nine-hole in Levi Smith, they grinded out at-bats and made sure to put pressure on opposing pitchers.

That was never more evident on Friday when the Cougars had the bases loaded with Smith at the plate and two outs. Tri-County’s pitcher tried to groove a 0-0 fastball to get ahead in the count. The ball landed around 400 feet later.

That’s what makes a great team — they get contributions from everyone throughout the lineup, and the Cougars got that.

That’s not to discount the depth of their pitching staff, either, as they go six-deep on the mound which is absurd depth from a MAIS AA school.

The Cougars threw Dawson Flowers in the second game of the series, a game they didn’t have to win to win the state championship, because they knew if it blew up they had other options to go to in a game three that would get the job done. That’s what pitching depth does.

Friday night in Flora was a culmination of a lot of hard work.

It was a culmination of a lot of talented players that had one of the more dominant runs through the postseason recently seen on that level.

It was a culmination, too, of a series that for all intents and purposes ended on Thursday.

Sports editor Collin Brister can be reached at collin.brister@dailyleader.com or 601-265-5306.

BA brings home state title — Cougars end the season in game 2 of the series with a 5-inning, run-rule…

Levi Smith came to the plate in the top of the fifth inning on Friday in his last high school... read more