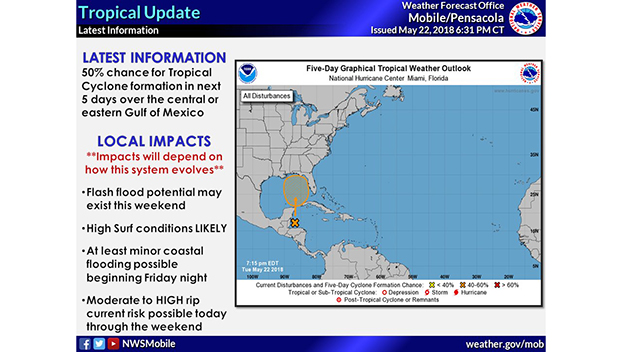 MOBILE, Ala. (AP) — Heavy rains from the Gulf of Mexico are causing flooding in the Southeastern United States ahead of what could become the season’s first tropical storm.

The National Hurricane Center said Wednesday a disturbance has a 60 percent chance of becoming a subtropical or tropical system by Memorial Day. The rain is forecast to continue even if it doesn’t.

A 60-percent chance of rain and storms for the Brookhaven area is forecast for Sunday and Memorial Day.

The system will be named “Alberto” if it strengthens into the first tropical storm of the 2018 season.

PURVIS, Miss. (AP) — A Mississippi sheriff says he believes that a man found dead in a freezer was murdered.... read more