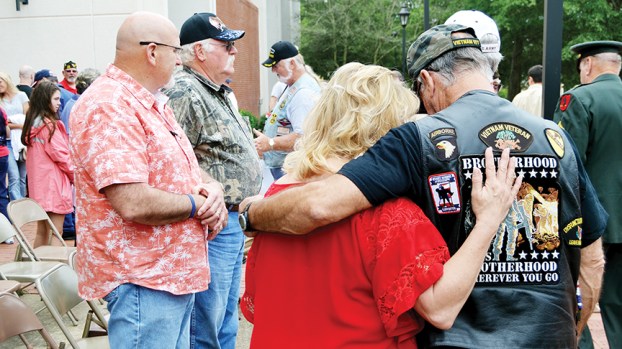 Daily Leader file photo Members of the Patriot Guard will present the colors at the annual Memorial Day ceremony Monday at the Lincoln County-Brookhaven Government Complex at 10 a.m.

They still will be remembered — No matter the weather, Memorial Day ceremony will take place Monday, 10 a.m.

Threats of storms have washed out a Memorial Day tradition, but the annual ceremony held at the county courthouse is still on, rain or shine.

Members of American Legion Post 12 decided Monday it could be too wet to place some 3,000 miniature American flags at the area cemeteries on the graves of veterans. The flags typically remain at the cemeteries from Saturday to Saturday for Memorial Day and again in November for Veterans Day, said Post Commander Keith Reeves.

“It looks like rain the whole weekend and most of next weekend, so we’ve decided not to put out the flags this year,” he said.

Excessive rain can damage the flags, which the post purchases.

“With the rain, it just deteriorates the flags so bad,” he said. “Far as I know, it’s the first time in several years we haven’t put out any.”

A memorial wreath-laying ceremony will be held beginning at 10 a.m. Monday at the Veterans Memorial at the Lincoln County-Brookhaven Government Complex. The wreath will be laid at the memorial no matter the weather, but in the case of rain, the ceremony will move into the courthouse.

Her father, the late Sgt. 1st Class Charles Burchfield, was an Army tank commander during the Korean War. He died in July 2016.

Vocalist Raven Brent will sing the national anthem and the names of the fallen veterans engraved on the memorial will be read, said Commander Ken Powell of Veterans of Foreign Wars Post 2618.

“We take time to read each and every name,” he said.

The Patriot Guard Riders will present the colors.

VFW Post 2618 Commander-elect Greg Marlow said he appreciates respect show to veterans in Lincoln County, but this day is set aside for those who are no longer with us.

“Memorial Day is not a day to thank me for my service,” he said. “That’s Veterans Day. Memorial Day is a day to sit back and reflect on the young men and women that made the ultimate sacrifice and didn’t come home or the ones that came home and passed away later. It’s a day to remember them, to honor them.”

Powell encourages the public Monday to also visit the Lincoln County Military Memorial Museum at 125 South Whitworth Ave., which will be open for several hours following the ceremony. It is usually closed on Mondays, but is open for Memorial Day.

“We have a wonderful military museum down there and its staffed by some really great guys. I think every school should visit that thing. Every class out of every school at some point should visit it,” he said. “It’s a great museum for a town three or four times our size, much less our size.”

Bids for a painting project at the Lincoln Civic Center are in, and commissioners have 10 days to check their... read more