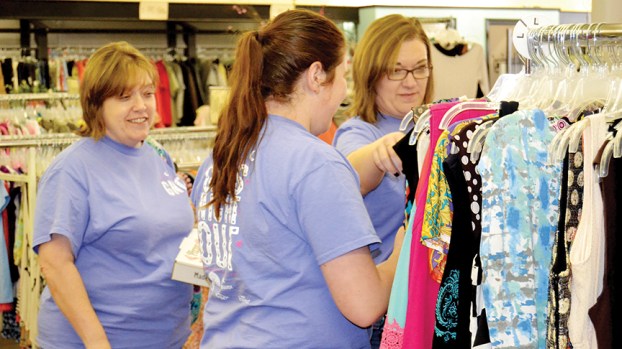 Photo by Donna Campbell/In 2017, over 1,300 tickets were sold for the seventh annual Girls Night Out in Brookhaven, drawing people from all over Lincoln County and outside the area, as well. Pictured are, from left: Susan Greer of Bogue Chitto, Lindsey Greer of Bogue Chitto and Rachel Hunt of Denham Springs, Louisiana, shopping at Roxy Magnolia.

Girls Night Out is branching out a bit.

Tickets go on sale June 1 for the popular social shopping event. But for the price of a ticket, shoppers can now get more than just six hours of deals, said Jillian Ricceri with the Brookhaven-Lincoln County Chamber of Commerce, which sponsors the event.

For the eighth annual Girls Night Out, the chamber is giving ticket-holders three days to shop. The “Night Out” will still be 3-9 p.m. on Thursday, June 21, with food and door prize drawings. But this year participating merchants and restaurants will redeem GNO coupons Friday and Saturday, June 22-23, as well.

“We felt like people didn’t have enough time on Thursday nights to go to all the participating retailers and restaurants,” she said.

Tickets are $20 in advance and available at the chamber and all of the more than 30 participating merchants. Those merchants will put out yard signs June 1, Ricceri said.

The cost for a ticket increases to $25 starting June 18.

A ticket gets the shopper an exclusive coupon book to all participating retailers and restaurants, a $10 meal voucher, an official GNO T-shirt and free entry to the second annual GNO 5K to be held June 23.

The meal voucher is good for the three event days only.

The coupon books contain pairs of tickets to retailers. The first coupon in the book is good through June 23. The second coupon expires Aug. 31.

In addition, shoppers can turn in their completed tickets at the chamber to be entered into a drawing for a chance to win up to $100 chamber bucks to spend at the participating retailer of their choice, Ricceri said.

About 1,350 tickets were printed last year, and chamber officials expect to either reach or surpass that number for the eighth annual event. More vendors are getting on board as well, she said. Several new merchants are participating, like Southern Surgical Services, which will be offering discounts for its new fat-freezing procedure.

Participating in the 5K is also expected to increase. About 50 to 75 women joined in the race last year. A GNO ticket includes free entry into the race, but those without tickets can still participate in the walk for a $10 donation, which will be used for a GNO scholarship in the Mississippi Scholars program.

The chamber will have first, second and third place prizes for winners and door prizes will be drawn after the race. Registration is at 8:30 a.m. and warm-up is at 8:45 a.m. in front of the chamber on South Whitworth Avenue.

Loyd Star ag first in state to be certified

It started with a fishing boat. Shelby Sterling, 17, was just a little boy when he’d help his father work... read more