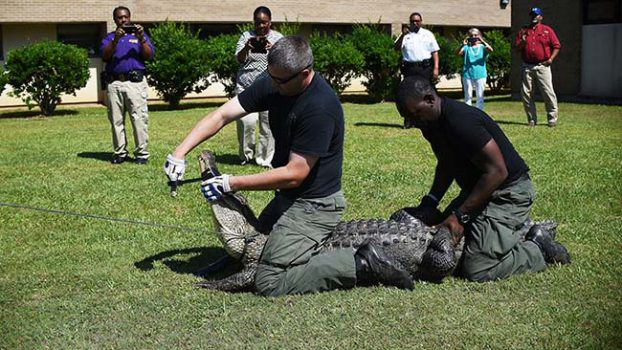 Officials from the Mississippi Department of Wildlife and Fisheries wrangle an alligator found on the Natchez campus of Alcorn State University Thursday. (Nicole Hester / The Natchez Democrat)

NATCHEZ — The Alcorn School of Nursing had an unexpected guest Thursday: A 9-foot alligator.

Lt. Kevin King, a campus security guard, was out for his daily walk when he noticed something lying beneath a shady bush in front of the nursing school.

King quickly called 911, which in turn directed him to Wildlife and Fisheries.

A crowd gathered on the pavement about 40 feet from the big, dormant alligator, but the mood was not grim or frightening. Instead, the mood was punctuated by a humorous curiosity.

“He has to have an appointment for the clinic,” said Debra Spring, dean of the school of nursing.

Spring and the dozen or so onlookers laughed and jeered at the big reptile that just lay dormant.

“We’re just trying to have fun with it,” she said. “It’s not something you see every day.”

For a while, some spectators speculated that the alligator may have died from the heat, but that theory fell flat as soon as Wildlife and Fisheries officers tried to slip a rope around its neck.

The alligator turned and hissed at officers Willie Wesley and Dustin Vanderslice as they slipped a rope around its neck and pulled it away from the bush.

After thrashing and spinning around in the grass, the alligator finally came to a stop long enough for Vanderslice to jump on top of it and hold its jaws shut.

The officers loaded the creature into the back of their truck and tied it down as the crowd tentatively stepped closer to take photos with their cellphones.

“He’s probably just tired or lost,” said Freddie Dawson, a maintenance worker for Copiah Lincoln Community College’s Natchez campus. “It’s funny how sometimes we have to take care of them.”

Dustin Vanderslice said he and Grace were just sitting at home when he got the call, so he brought her along, too.

One day, Grace said, she wants to wrestle alligators, too.

Groups offer $500 for conviction in shooting that hurt dog