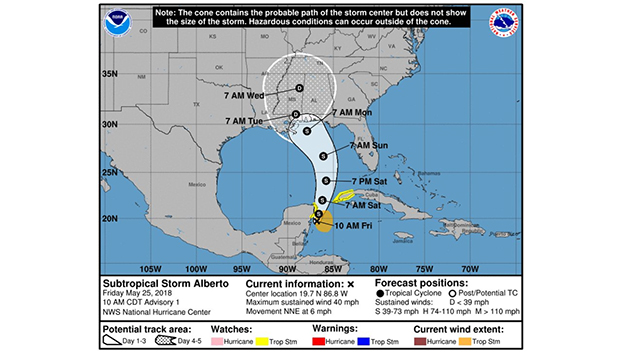 MIAMI (AP) — The first named tropical weather system of the 2018 hurricane season has formed. The National Hurricane Center says a disturbance moving toward the Gulf of Mexico is now Subtropical Storm Alberto.

Alberto had top sustained winds of 40 mph early Friday and was located 55 miles south of Cozumel, Mexico. The storm was moving north-northeast at 6 mph (9 kph). The storm is expected to bring heavy rain to the Yucatan Peninsula, western Cuba, Florida and the northeastern Gulf Coast throughout the weekend.

The National Hurricane Center said Friday that a low pressure system in the northwestern Caribbean Sea has become better defined overnight and could be a tropical depression or storm by Saturday. The center put chances of formation at 90 percent over the next two days.

The tropical threat comes earlier than usual. The six-month hurricane season doesn’t begin until June 1. If it becomes a tropical storm, it would be named Alberto.
Parts of Florida, Georgia, Alabama, Mississippi and Louisiana have already seen heavy rain this week, meaning the deluges that could accompany a tropical storm may leave those communities vulnerable to flash flooding and river flooding. Some beachfront and riverfront communities are already handing out sandbags.

The downpours could dampen Memorial Day, the unofficial start of the summer tourist season along Gulf beaches. Along with heavy rains and high winds comes rough seas and a threat of rip currents from Florida to Louisiana. Those currents can sweep swimmers out to sea.

Red flags warning of dangerous surf conditions are already flying along some beaches. Jordan Sawmiller of Ohio tells WALA-TV that he was approaching the water with caution in Gulf Shores, Alabama.

“It will hit you pretty hard . and it sucks you right back out. So, I don’t like getting in there very far,” Sawmiller said.

A hotel owner in Panama City Beach, Florida, tells the Panama City News Herald that her family’s five hotels are normally full on Memorial Day weekend. But Julie Hilton said people are cancelling because of the weather and room reservations are down about 20 percent.

Heavy rain could also be bad news for farmers. Georgia Peanut Commission Chairman and farmer Armond Morris and Tyron Spearman with the National Peanut Buying Points Association inspected a south Georgia peanut field Thursday. They told WALB-TV that farmers are worried about already-soaked young plants.
“Just hopeful that all the peanut stands will be OK, but we may have to replant some peanuts,” said Morris.

Only 65 percent of the 2018 Georgia peanut crop has been planted.

“The crop is not growing as well as it should be,” said University of Georgia Tifton peanut agronomist Scott Monfort. “So we are getting some cases of yellow peanuts just not growing.”

VICKSBURG — The dates are forever burned into the memories of Robert and Sheri Wallace. On April 21, 2014, their... read more