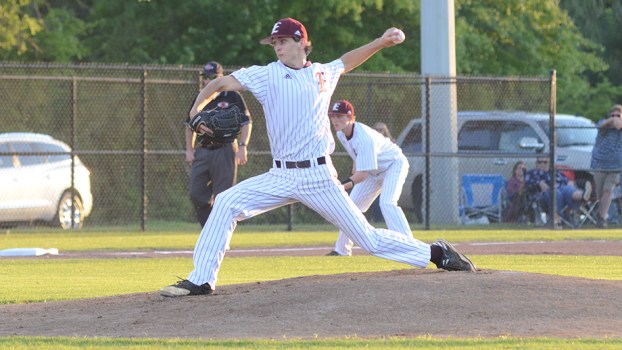 Photo by Collin Brister Austin Fugler was the No. 2 pitcher for the Yellow Jackets this season, posting a sub-three ERA and striking out more than one hitter per inning.

In part two of a series looking back at baseball season, The Daily Leader takes a look at Enterprise High School and West Lincoln High School’s baseball teams, as both placed in the top four of their district and were able to take part in the MHSAA 2A playoffs.

The Yellow Jackets had one of their best seasons in school history in 2018, finishing the year with 18 wins and an appearance in the third round of the playoffs.

The Yellow Jackets garnered the No. 2 seed which slotted them into a playoff series against Pisgah in the first round.

Enterprise jumped out to a strong start, beating Pisgah 10-8 in the first game of the three-game series, and finishing the series off the next day to advance to the second round.

In the second round, Enterprise won a series over Enterprise-Clarke in what head coach Cass Brister said was the best playoff series he’d ever been a part of.

Enterprise won the second game over the Bulldogs after entering the seventh inning trailing 3-1, but three runs in the bottom of the inning sent the Yellow Jackets into a third-round matchup with Perry Central.

Perry Central beat Enterprise in game one of the third-round series, and were able to eliminate the Yellow Jackets the next day with a 10-6 victory.

At the plate, Enterprise was led by Hunter Richardson and Landon Gartman, both of whom hit over .400 in their senior season.

On the hill, Gartman and Austin Fugler were the two pitchers that Enterprise relied heavily on throughout the season. Gartman struck out 118 hitters in 58 innings and had a 1.93 ERA on the year.

The Bears finished the season with a 10-16 mark and a 4-8 record within their district, and were allotted the No. 4 seed in the playoffs via their three wins over Amite County.

West Lincoln fell to eventual state champion St. Joe in the first round of the playoffs to end their season.

Landon Lynch and Kylar Fielder had superb seasons at the plate for the Bears, with both hitting over .400 for the year.

Fielder slugged over .800 for the Bears, while Lynch posted a 1.110 OPS for West Lincoln on the season.

Fielder and Lynch were versatile for West Lincoln as both doubled as pitchers  West Lincoln throughout the season. Lynch struck out 36 hitters in 40 innings this season.