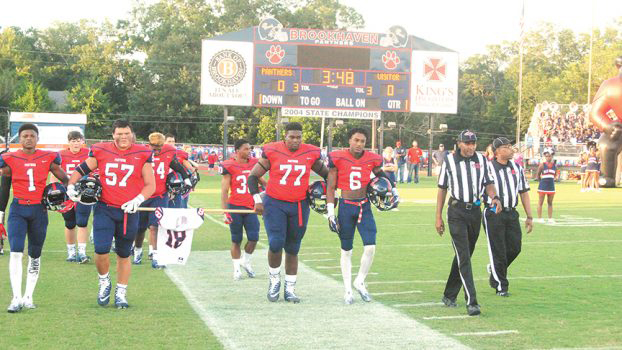 Daily Leader file photos Above: Jordan Blackwell was a heralded linebacker for the Panthers coming into the 2017 season, before his life was tragically taken on May 28, 2017. The Panthers honored Blackwell all year by painting his number in the end zone, taking his jersey to midfield, and painting the 18-yard lines on the field. Below: Jordan Blackwell.

‘Everything we did was for him’ — The Brookhaven Panthers played football hard, strong for their brother Jordan

There was a conversation in the Brookhaven High School football locker room in the spring of 2017, before the Panthers went out for an ordinary practice in preparation for the 2017 football season.

Trace Clopton, a senior offensive lineman, sat on one side of the locker room. Jordan Blackwell, a starting linebacker, sat on the other.

The two had recently been elected team captains for their upcoming seasons, and they knew the onus was on them if the Panthers were going to be successful in 2017. So there they sat in April, discussing what they were going to do to get to the 5A state championship game in Vaught-Hemingway Stadium in Oxford that winter.

And they were going to do everything that they could to play for, and win, a state championship.

Blackwell, a rising linebacker that had garnered interest from Division 1 schools, was murdered on May 28, 2017, while protecting his 15-year-old cousin.

There would be no senior year, or tackles for loss, or prom, or state championship appearance, or graduation, or Division 1 scholarship because Blackwell’s life was taken, horrifically and tragically, too soon, in the early-morning hours of that May morning. He was gone because of a senseless act of violence that brought terror on Lincoln County that morning.

Tommy Clopton, the football coach at Brookhaven High School at the time, remembers vividly the phone call informing him of Blackwell’s death. He remembers waking up at 2 a.m. to a plethora of missed calls and text messages asking if the rumors were true.

He remembers everything about it.

“It takes your breath away,” Clopton said. “When you have to face the reality of what has happened, it really just takes your breath away. I remember sitting on the bed crying, and realizing that no matter how hard we try, we can’t always protect them. Your heart immediately aches for the parents and the family.”

With the shootings happening early into Sunday morning and with Memorial Day on Monday, the Panthers weren’t able to get together for workouts until Tuesday the following week, but Clopton opened the field house  Monday for players who needed to come talk or be around each other.

“It really took a couple of days for everyone here to get their head on straight,” Clopton said. “It was such as a shock to the whole community with how many people were affected.”

There’s a word synonymous with Blackwell and his mindset on the football field that everyone who knew him uses — competitive.

“He was extremely competitive on the field,”  Clopton said. “You refer to them as knuckleheads when they come in the ninth and 10th grade, and the best part is seeing him grow and mature throughout his time. He became an extremely good player throughout his junior season.”

Jeffery Johnson, a freshman for the Tulane Green Wave and former teammate of Blackwell’s, said he was the most competitive person he’s ever seen.

“He would talk trash, but it was in a good way,” Johnson said. “That’s what we loved about him. He was a great football player, too, and a great linebacker.”

Trace Clopton, a freshman for the Southern Miss Golden Eagles, called Blackwell an “extreme” competitor not just on the football field, but in life.

“Not everything was rainbows with Jordan, in that he was going to show you tough love,” Trace said. “But he showed real love.”

Blackwell wanted to win, and he wanted to win badly. He was football smart, and he had to be because the Panthers counted on him to play early in his career.

“In a day and age where everybody says it’s OK to lose if you do your best, Jordan wasn’t like that,” Trace said. “He wanted to win.”

Blackwell’s locker remained untouched throughout the season, except for the Panthers hanging up his jersey on Friday nights.

“We played all season with inspiration from him,” Johnson said. “Everything we did was for him. We played for him. We never forgot, and we honored him in everything that we did.”

The captains took that jersey out to midfield every Friday night to represent what Blackwell meant and that he was still with them in spirit.

“We did all those gestures for Jordan, but it was in the way that they prepared and played each day,” Tommy Clopton said. “It was how they put one foot in front of the other that was impressive to me.”

Tommy Clopton said that there was no greater honor than being asked to speak at one of his player’s funerals, but he doesn’t ever want to have to do it again. He spoke at Blackwell’s, and by doing so it made him understand how much he cared, and still cares, about the players who came through his program.

“When you do that though, when you speak at a player’s funeral, you begin to learn how deep and sincere your relationship with them really was,” Tommy Clopton said. “I think your perspective on how much you truly care about your kids changes. Until you’ve lost one, you don’t really know how fragile it is.”

So, they played football. They played without a brother, a teammate, a friend and a middle linebacker that had meant so much for a powerhouse 5A program.

They played without Blackwell, who Trace Clopton said you’d never catch without a smile on his face, and everything that he meant to the team.

They played without a young man that had become an ideal football player and person over his time at Brookhaven High.

“Unfortunately, this is part of life,” Tommy Clopton said. “But our kids learned that their strength has to come from God, and they learned that they have to lean on each other to get through the tough times.” 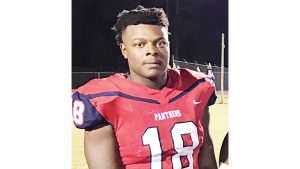 In part two of a series looking back at baseball season, The Daily Leader takes a look at Enterprise High... read more