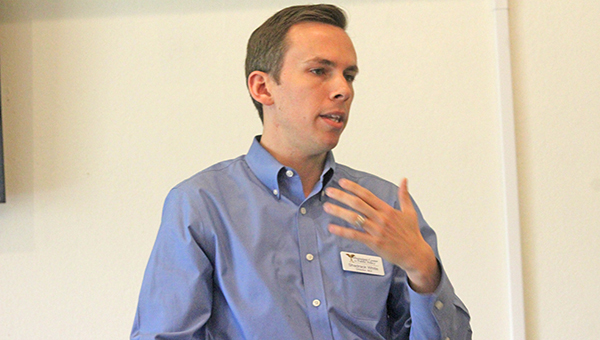 Shadrack White, the Director of the Mississippi Justice Institute, spoke at the Vicksburg Kiwanis Club Tuesday about his orgainzation’’s pending lawsuits including one against the city of Natchez.

VICKSBURG — A months-long stink over garbage collection in the city of Natchez has now led to a complaint being filed with the Mississippi Ethics Commission accusing the Board of Mayor and Aldermen of not following open meeting laws.

Speaking at the Vicksburg Kiwanis Club Tuesday, Shadrack White, the director of the Mississippi Justice Institute, detailed his organization’s newest case against the city of Natchez.

The complaint was filed May 8 and accuses the city of Natchez of violating open meeting laws when the board discussed the terms of a new garbage collection contract behind closed doors on May 3.

According to reporting by The Natchez Democrat, those negotiations led to a 25 percent increase in garbage collections fees and were just the latest in a string of mistakes the city allegedly has made after deciding to make changes to its garbage collection contract.

The Mississippi Justice Institute represents people free of charge in cases where they “have been hurt by a government regulation or they would like to challenge an unethical action by a politician or they have had their free speech rights taken away,” White said.

The case in Natchez was brought to institute’s attention by a group of local lawyers and White said they quickly stepped in hold the city accountable.

“We have won cases like that in the past and we are hoping this case goes well too,” White said.

“This is the sort of thing that happens in quiet little corners of Mississippi all the time. There are places where the person who succeeds in the economy has the best connections to the politicians. Not necessarily who has the best business model.”

The complaint alleges that by negotiating the contract behind closed doors, the city of Natchez violated sunshine laws that detail specific exemptions for what business can be discussed in closed session.

“We stepped up and filed a complaint with the Mississippi Ethics Commission saying basically when you are debating about who is getting a taxpayer-funded contract, you’ve got to do that out in the open.”

White said after questioning the city on the legality of discussing the contract in closed session, the city said it was allowed to because of an exemption that allows boards to “debate in private anything that has to do with the ‘location, relocation or expansion of a business.’”

After the city refused to change its position, White said his organization decided to go forward with filing a complaint to the ethics commission.

“That particular exception is geared towards protecting the privacy of economic development conversations,” White said.

“Debating about who gets a city contract is not about the location, relocation or expansion of a business. If it were, 50 percent of the conversation cities have they’d be able to have in private.”

The case is currently open, and White said the ethics commission typically has three remediations at its disposal including fining the city with the money going to the state and holding the city accountable for attorneys’ fees.

Alberto is 2018’s first named tropical system and its…