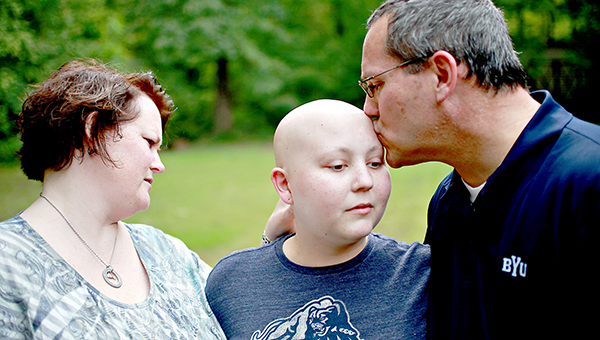 Afton Wallace, center, stands with her parents Rob and Sheri outside their home during her treatment for Ewing’s Sarcoma in 2015. Afton died from the disease on May 24, 2015, a year after her diagnosis. (File/The Vicksburg Post)

VICKSBURG — The dates are forever burned into the memories of Robert and Sheri Wallace.

On April 21, 2014, their oldest daughter Afton Wallace had an MRI trying to find the source of her pain and nothing was found.

A month later on May 22, a new scan showed her body riddled with tumors and cancer.

A year to the day later, Afton walked across the stage under her own power and graduated from Warren Central High School, where she had been named the STAR student her senior year.

Less than two days later, on May 24, 2015, Afton Wallace died from Ewing’s sarcoma following a yearlong battle with the disease.

Today marks the three-year anniversary of Afton’s death and building upon the community support that rallied around Afton, her parents are working to raise awareness for pediatric cancer in her memory.

“There are not words to describe the feeling. It is beyond devastating,” Robert Wallace said of his reaction when he first heard Afton had cancer. “It is like your whole world and everything you have built your life on is yanked away. It is so devastating a diagnosis that I can’t describe it. Every part of your body hurts. Your mind hurts, you go into a tailspin and your emotions are reeling.”

According to St. Jude’s Research Hospital, about 200 children and young adults are diagnosed with Ewing’s sarcoma, the type of cancer Afton had, each year in the United States with roughly half of those impacting people between the ages of 10 and 20.

Because that number is so low as is the total number of adolescents diagnosed with cancer annually compared to adults, the research on the disease is incredibly limited.

“The chemotherapy she got, these are all drugs that have been around for a long time,” said Dr. Scott Borinstein, who treated Afton at Vanderbilt. “She initially received five different chemotherapy treatments all that have been developed to treat other cancers over the last 30 years.

Borinstein said of every dollar spent on cancer research in America each year, only four cents are spent on pediatric cancer, meaning it is difficult for research to be done because of the amount of resources required.

“The reason we do what we do is because of patients like Afton,” Borinstein said. “She was just an absolutely great young lady. She was as smart as anybody you’ve ever met. All you wanted to do was help her and I think that is what is frustrating for us sometimes is when we do the best we can, but we still don’t have the tools at our disposal to cure her.”

The reason for that lack of funding is because with only 15-16,000 cases of pediatric cancer diagnoses in America annually, there are not enough cases for drug companies to return a profit, said Dr. Anderson Collier III, who treated Afton in Jackson.

“As a physician and a scientist, it is exceedingly frustrating,” Collier said. “As a person who treats kids and has dedicated my life to taking care of kids, to think that money is put ahead of a child’s life is infuriating. I understand that drug companies are in it for the money. I don’t want to make drug companies out to be the enemy, because they are not. Without them, we don’t even have the drugs we’ve got, but the priorities for whoever makes these seem a little skewed.”

The lack of funding and comparatively little attention paid to pediatric cancer is what the Wallaces are working to change. They started a nonprofit called My Mission is Remission, the theme Afton used for her treatment. They are still in the early stages, but are working to make gold, the color for pediatric cancer, as well known as pink is for breast cancer.

“Everybody goes pink in October and you have kids that play football and they are in elementary school and they get pink jerseys to wear,” Sheri Wallace said. “But nobody tells these kids they should wear gold in September because it is kids their age.”

Much of their attention is focused on September, the National Pediatric Cancer Awareness Month, when they are planning multiple events to raise awareness. Sept. 1 they hope to have a run to kick off Vicksburg going gold for the month and the Vicksburg Swim Association, of which Afton was a longtime member, is planning a meet in her honor that month.

“Yes, we are passionate because of what happened to Afton, but we are also passionate because of the idea of why aren’t we spending money on this research?” Sheri said.  “We would like to see them divert some of those funds so we can begin working on pediatric cancer and find some cures. The devastation this takes on a family is so severe and we don’t want anybody to go through this.”

The Wallaces along with Borinstein and Collier argue that while the profit might not be there, the impact you can have by treating a child with cancer is unrivaled in any other area of cancer research.

“Those of us who treat it, while it is important to treat 70-year-olds with cancer, when you are talking about a 10-year-old, you are trying to save 60 to 70 years of life,” Collier said.