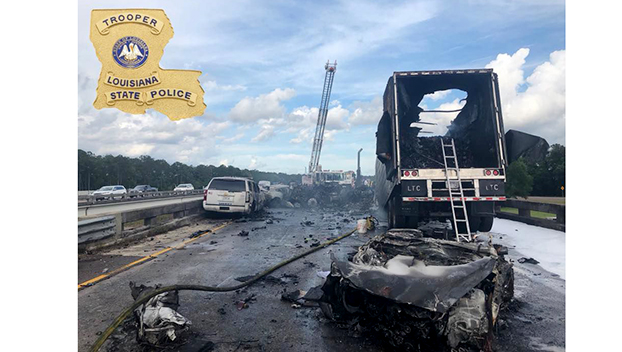 The crashes happened about 4 p.m. and shut down the entire eastbound portion of I-12, but one westbound lane was open.

Jeremy Windom, public information officer for St. Tammany Fire Protection District No. 4, said one of the injured was taken to an area hospital with life-threatening injuries, four people were taken to hospitals with moderate injuries, and eight were treated and released at the scene.

The St. Tammany Coroner’s Office said two victims were pronounced dead at the scene, according to a WWL-TV report, one was taken to St. Tammany Parish Hospital where resuscitation attempts failed and investigators were still at the scene of the accidents Saturday night trying to find the fourth victim.

“Crashes like this are horrific and they don’t just affect the first responders on scene, they also affect all the families involved, the communities they live in. It’s a widespread effect and it’s usually because people don’t pay attention behind the wheel,” Melissa Matey of Louisiana State Police said.

One of the 18-wheelers was completely engulfed in flames, causing many witnesses to stop and take pictures and video of the accident.

Reports of explosions were circulating, but Windom said they likely were tire explosions.

Capt. Scott Lee, of the St. Tammany Parish Sheriff’s Office, said an initial accident involving an 18-wheeler and passenger cars started the chain of events. A sheriff’s deputy in the area stopped to render aid when a second crash involving a tanker-type truck and multiple vehicles occurred.

Lee said the deputy’s vehicle, a Chevrolet Tahoe, was involved in the second crash and completely burned up. The deputy was transported to a hospital out of caution but was released that evening.

Windom said first responders from all over western St. Tammany Parish responded to the crash, including Fire Districts No. 2, No. 4, No. 8, No. 12 and No. 13, the Covington Fire Department, the Sheriff’s Office and Louisiana State Police.

US Gulf Coast braces for impact as Alberto approaches