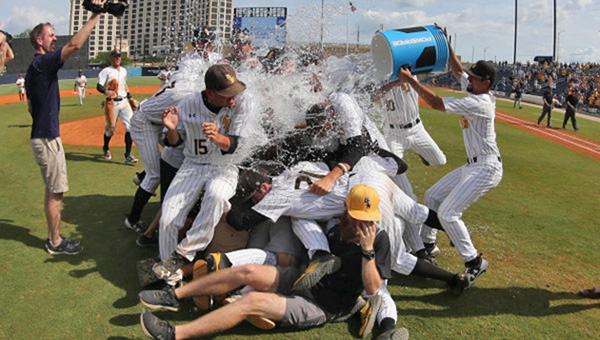 Southern Miss baseball players dogpile and douse each other with water as they celebrate their 12-3 win over Florida Atlantic in the Conference USA tournament championship game Sunday in Biloxi. (Joe Harper/Southern Miss Athletics)

BILOXI — For much of the 2018 season, the talk around Southern Miss baseball was the potency of the Golden Eagles’ offense.

But over a five-day stretch at MGM Park in Biloxi, USM rode its pitching to claim the Conference USA championship.

Junior right-hander Mason Strickland won C-USA tournament Most Valuable Player honors after throwing a three-hit shutout in a 6-0 victory over Charlotte on Sunday morning to put top-seeded USM in the championship game for the third consecutive season.

Then, in Sunday afternoon’s finale, junior left-hander Adam Jackson and senior right-hander Keller Bradford combined to limit Florida Atlantic to three runs on seven hits as the Golden Eagles claimed their second C-USA title in three years with a 12-3 victory.

Southern Miss (43-16) also won the league’s regular-season title. The tournament title comes with an automatic bid into the NCAA Tournament, the third consecutive year the Golden Eagles have made the 64-team field that will be announced Monday morning.

“I’m just so proud of everybody because it’s so hard to do what we just did,” Southern Miss coach Scott Berry said, “to win the regular-season conference title and then try to hold off seven other teams to win this automatic bid. The attitude was all about the mental.”

Strickland and Jackson had combined for 42 appearances on the mound this season, but had made only two starts between them before Sunday.

“Those guys really responded,” Berry said. “That was pretty special, what Mason Strickland did, covers nine innings in 92 pitches, and really saves the rest of our pitching staff.”

In the final, Jackson had thrown 2 1/3 scoreless innings when he was removed from the game with an injury. Bradford (3-1), a former Central Hinds Academy star, entered and did not allow a run until he gave up a two-out, three-run home run to Gunnar Lambert in the seventh inning.

At that point, USM had built a 5-0 lead on two-run home runs by Matt Wallner and Bryant Bowen and a run-scoring single by Wallner.

Following Lambert’s shot, Southern Miss added two runs in the seventh on Gabe Montenegro’s solo home run and an RBI single by Daniel Keating. The Golden Eagles added four more runs in the eighth on RBI hits by Wallner, Hunter Slater and Matthew Guidry and a two-run double by Keating.

USM’s 12 runs were the most in a C-USA championship game since 2007, and the Golden Eagles became the first team to play twice on Sunday and win the conference championship.

“You get that momentum going, that’s what we do,” said Wallner, who had a career-high four hits in the championship game, while driving in four runs and scoring twice. “That’s how we roll, and hopefully, we can use that momentum going into the regional.”