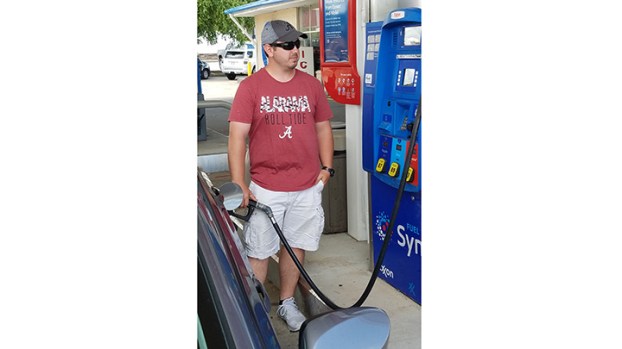 Photo by Donna Campbell/Bryce Layne, of Illinois, fills up his gas tank Monday on Brookway Boulevard on his way home from vacationing in New Orleans.

Gasoline prices slipping down for now — Fuel costs down after Memorial Day, but hurricane season could make impact

Gasoline prices are expected to drain down from four-year highs in the coming weeks now that Memorial Day weekend is over, but the arrival of hurricane season and uncertainty in global politics will continue to influence the market.

Fuel prices around Brookhaven on Monday were already down a nickel from the kickoff of driving season Friday morning, with prices ranging from $2.64 per gallon on the low end and $2.67 per gallon on the high side. Prices should continue to ease downward through June and maybe inch back up before the Fourth of July, said R.B. Wall Oil President Ken Powell.

“That’s just kind of a cyclical thing,” he said. “How much higher it’s going to go really just depends on world events.”

Powell said hurricane season could have the biggest impact on gasoline prices over the summer, as tropical storms entering the Gulf of Mexico have immediate and sometimes long-lasting effects on the U.S. oil market. An active hurricane season in 2017 saw four major storms impact the nation, and three of those — Harvey, Irma and Nate — entered the Gulf.

Hurricane Harvey caused widespread flooding on the Texas coast during the last week of August, forcing the closure of refineries in the Houston area and knocking out an estimated 25 percent of the national refining capacity. Fuel prices climbed as a result.

The National Oceanic and Atmospheric Administration is predicting the 2018 hurricane season to be normal or above-normal, with 10 to 16 named storms and one to four major hurricanes expected this summer. The season officially begins June 1, though Subtropical Storm Alberto got a head start when it made landfall in the Florida panhandle Monday.

Alberto tracked up the oilless eastern side of the Gulf, off the coast of Florida, and has not affected the drilling fields in the western Gulf around Louisiana and Texas.

So far this week, Mississippi ranks second behind South Carolina when ranking the nation’s lowest gasoline prices, with fuel in the Magnolia State selling for an average of $2.66 per gallon. The most expensive gas is being sold in California, where the state average is $3.73 per gallon. Prices nationwide are up around 50 cents over 2017 prices.

Other than tropical weather, Powell is keeping his eye on global events as an indicator for gasoline price fluctuation. Even though oil inventories remain high, uncertainty surrounding America’s relations with North Korea, the threat of a trade war with China and the restoration of economic sanctions on Iran — OPEC’s third largest oil producer, and the fifth-biggest oil producer in the world — are keeping prices higher than they should be, and bad news on any of those fronts could push them even higher.

“There’s more supply than there is demand, but prices are going up anyway,” Powell said. “A lot of what’s driving these recent price changes, I think, is some of the rhetoric going on around the world.”

Two suspects wanted in the fatal shooting at a Hazlehurst nightclub last week turned themselves in to law enforcement Friday... read more