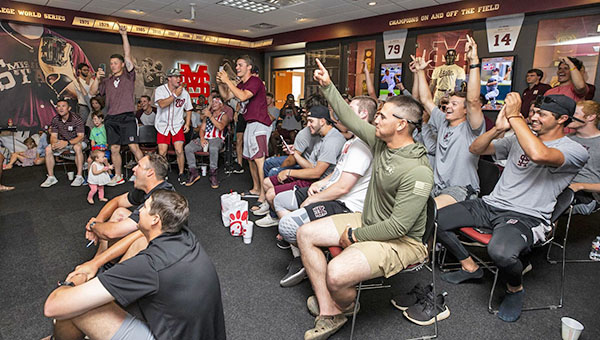 Mississippi State baseball players celebrate as their team’s name is called during the NCAA Tournament Selection Show on Monday. The Bulldogs will play Oklahoma in the Tallahassee Regional on Friday. (Mississippi State Athletics)

After an up-and-down season and a one-and-done performance in the Southeastern Conference Tournament, there was some question about Mississippi State’s status for the NCAA Tournament.

As it turns out, the Bulldogs made it with room to spare.

It’s the third season in a row, and seventh time in eight years, that Mississippi State has qualified for the NCAA Tournament.

The bid caps a remarkable turnaround in a season of turmoil. Head coach Andy Cannizaro resigned after the Bulldogs were swept by Southern Miss on opening weekend, and they entered April with a 14-15 overall record.

They took two out of three from Ole Miss, however, and used it as a springboard to a strong second half of the season. The Bulldogs wound up going 17-10 over their last 27 games, which included sweeps of top-five national seeds Florida and Arkansas.

The sweep of Florida to close the regular season seemed to move the Bulldogs off the NCAA Tournament bubble and squarely into the field.

“We’re not the first team to have a season like that, but we did,” Mississippi State coach Gary Henderson said at a press conference Monday. “I think the thing you have to focus on is not what you weren’t able to do, but what you were able to do. And what we were able to do is step up against the best people in the country, play competitive and play with a lot of confidence. We won a lot of close games. I’m really proud of our effort against those clubs.”

Mississippi State has some history with Tallahassee and its opponents, but not much of it is recent. It’s the third time it has played a regional there in the past 11 years, although the last time was in 2012, and has faced Florida State 10 times in the NCAA Tournament.

The Bulldogs have played Samford twice in the postseason, both at the 2012 Tallahassee Regional. They last played Oklahoma in a regular-season game in Los Angeles early in the 2016 season. Mississippi State and Oklahoma have not met in the postseason since 1992.

Florida State, at 41 NCAA Tournament appearances in a row, has the country’s longest active streak, but no national championships to show for them. It won the ACC championship for the second season in a row.
Mississippi State will have had 10 days between games when it returns to the field against the Sooners.

Henderson said the team kept busy last week with a couple of intrasquad scrimmages that gave him a dose of optimism for their prospects at the regional.

“We had two six-inning intrasquads on Saturday and Sunday, and I would say our kids were outstanding in their effort level and concentration,” Henderson said. “The coaching staff was pleased. I think the kids were pleased with themselves. This late in the year, when you don’t play for another week, having a quality practice can be elusive. But our guys did a great job.”

Ole Miss won’t have to leave its own neighborhood to travel the road to Omaha. The Rebels on Monday were... read more