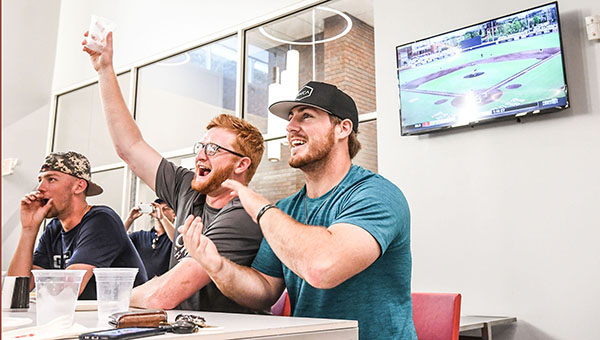 Ole Miss won’t have to leave its own neighborhood to travel the road to Omaha.

The Rebels on Monday were named the No. 4 national seed for the NCAA Tournament. They’ll host a regional in Oxford beginning Friday, and if they can win it a super regional next week as well.

“Everybody that’s been here knows how crazy it can be,” Ole Miss coach Mike Bianco said of Swayze Field during the NCAA Tournament Selection Show on ESPNU Monday. “To play LSU in the (SEC) final and the tradition of that program, and all the success that they’ve had and how well they travel, but we had more fans than they had in Hoover. And obviously it’s going to be rocking this weekend in Oxford.”

Ole Miss entered the Southeastern Conference Tournament seemingly on the cutline for a top-eight national seed that would guarantee homefield advantage in the first two rounds of the NCAA Tournament. It eliminated any doubt by winning its first SEC championship since 2006, capped off by a 9-1 rout of LSU on Sunday.

It’s the 15th time in 18 seasons under Bianco that the Rebels have made the tournament, and the eighth time in 15 years they’ll host a regional. This year’s selection comes after the Rebels failed to make the NCAA Tournament in 2017.

Ole Miss lost both games of its home regional in 2016, and has only reached the super regional round once since 2009.

“We’ve got a great team. And we had a great team last year that just didn’t play well. When you have a lot of young guys in our league, if you don’t play well you get beat up in a hurry,” Bianco said. “We took our lumps last year, and credit to these guys. They grew up in a year and put a terrific record together. I can’t remember, not just my club but another club that has played so well since game one to game 56 and we capped it off in last week’s SEC Tournament.”

Ole Miss is the No. 1 seed in the regional, but far from the only talented team coming to Oxford.

Saint Louis had a 15-game winning streak earlier this season and has won nine of its last 10 coming into the regional. The Billikens won the Atlantic 10 tournament title and are in the NCAA Tournament for the first time since 2013. Coincidentally, that was the last time they faced Ole Miss. The Rebels won 8-7 in a regular-season game.

No. 2 seed Tennessee Tech won the Ohio Valley Conference regular-season championship, leads the country in wins, and is making its second consecutive appearance in the NCAA Tournament.

Missouri State, seeded third, won the Missouri Valley Conference championship and is in the NCAA Tournament for the third time in four seasons. Last year, it beat host Arkansas twice to win the Fayetteville Regional and advanced to the super regional before losing to TCU.

Tickets
Tickets for the Oxford Regional will go on sale to non-season ticketholders on a first come, first serve basis beginning Wednesday at 1 p.m. if any reserved seats remain. Season ticketholders must reserve their seats by Tuesday at 5 p.m.
Tickets can be purchased online at olemisssports.com. The cost ranges from $60 for general admission through $215 for Dugout Club seats. The price includes tickets to all seven regional games.

Police: Murder, arson suspect may have fled to Mississippi