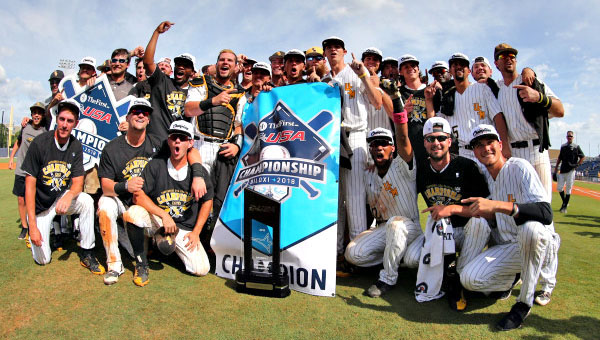 Southern Miss baseball players pose with the Conference USA trophy and banner after winning the league tournament on Sunday. Southern Miss earned an automatic bid to the NCAA Tournament and will play in the Fayetteville Regional at Arkansas beginning Friday. (Joe Harper/Southern Miss Athletics)

Southern Miss is No. 1 in Conference USA, and a No. 2 in the NCAA Tournament.

The Golden Eagles, who won the C-USA regular-season and tournament championships, will head to Fayetteville, Arkansas as a No. 2 seed for the regional round of the NCAA Tournament.

The regional assignments were announced Monday. Southern Miss (43-16) will face third-seeded Dallas Baptist (40-19) in the first round of the Fayetteville Regional Friday at 7 p.m. Host Arkansas (39-18) will play Oral Roberts (38-18) at 2 p.m. in the first game.

Southern Miss is in the NCAA Tournament for the 15th time overall, and third year in a row. It has won at least one game in each of its last three regional appearances, but has not been to a super regional since reaching the College World Series in 2009.

USM saw its RPI take a major hit with a late-season skid in which it lost three of four games, but earned an automatic bid by winning the C-USA title.

“It feels good. That’s like hitting a hole-in-one. There’s no doubt that you did it,” Southern Miss coach Scott Berry said after Sunday’s 12-3 win over Florida Atlantic in the C-USA tournament championship game.

Southern Miss will have a daunting task ahead as it travels to Fayetteville. Regional host Arkansas, the No. 5 national seed, is 30-4 this season at Baum Stadium and did not lose in its eight series there. The Razorbacks had the best home record in the Southeastern Conference.

Dallas Baptist is making its fifth straight NCAA Tournament appearance, one of only 10 Division I teams to achieve that feat. The Patriots made the NCAA Tournament as an at-large team after losing to Missouri State in the Missouri Valley Conference tournament championship game.

Oral Roberts won the regular-season and tournament championships in the Summit League.

Southern Miss has never played Oral Roberts. It hasn’t faced Dallas Baptist since 2007, and Arkansas since 1995.

After an up-and-down season and a one-and-done performance in the Southeastern Conference Tournament, there was some question about Mississippi State’s... read more