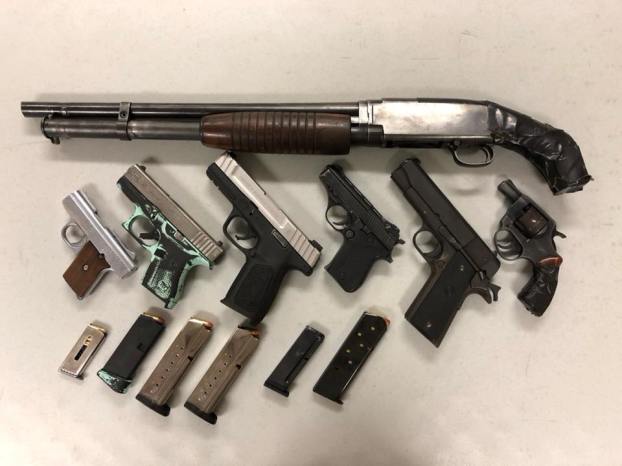 Brookhaven police recovered a small weapons cache near Exchange Club Park Tuesday after a nearby resident called to complain of gunshots down the street.

Brookhaven Police Chief Kenneth Collins said officers responding to the call stopped a group of six young men walking around the park, arrested one on a concealed weapons charge and discovered a handful of pistols and one shotgun in the woods nearby. Officers took all the weapons and are checking to see if any are stolen or have been used in other crimes, and further charges could be pending, he said.

“They were goofing off. When you’re a kid, or you’re almost grown and you got a gun, you gotta show off and let everybody know you got one,” Collins said. “That’s why all these calls came in.”

Collins declined to release the name of the arrestee, and arrest records from the Lincoln County Jail show no arrests made by BPD Tuesday. However, if the young man was a juvenile, he would not be listed. The other five were not actually caught discharging weapons — or possessing weapons, legally or not — and were not arrested, he said.

“We found (the weapons) in the woods, but we know all those kids had them,” Collins said. “They threw them down when they saw the police, tried to get rid of them. You don’t want the police to find a weapon on you.”

Collins said seven firearms were recovered, but he believes officers may end up finding a few more as the investigation continues. Tuesday night’s cache contained an old Winchester Model 12 shotgun with the stock sawn down, a 1911 pistol, a snub-nosed revolver and other handguns.

No one was hurt when the shots were fired and no property damage was reported, Collins said, though he stressed that firing guns into the air is not safe.

“What goes up has to come down. If you shoot into the air, that projectile is still deadly when it’s falling from the sky,” he said.

The Brookhaven Farmers Market gets underway Friday with an abundance of potatoes and corn ready to purchase. Beans and squash... read more