A year after being selected as an All-Star for the first time in his career, former Brookhaven Academy alum Corey Dickerson is tearing up major league pitching again.

He’s in his first year with the Pirates, as the Tampa Bay Rays traded him in the offseason. The Rays appear to be in full rebuild mode and unloaded valuable pieces that could give them alluring prospects over the offseason.

As of Monday, Dickerson has shown his presence via the extra-base hit variety, as the slugger has four extra-base knocks in 204 at-bats, including 16 doubles, three triples and five homeruns.

Maybe the most impressive stat Dickerson has had this season is that he’s only striking out in 11 percent of his at-bats, the lowest percentage of his career.

As a left-handed hitter, the knock sometimes on the former Cougar is that he struggles with left-handed pitching, but Dickerson has dispelled that notion so far this season.

He’s hitting .357 against southpaws, along with a .500 slugging percentage, good for a .887 OPS against left-handed pitching.

For comparison’s sake, Dickerson is hitting .301 against right-handed pitching, and he only has an OPS of .825 against righties.

Dickerson got off to a torrid start this season, as he was one of the best players in the MLB in April. Then, Dickerson hit .323 and had an OPS of .907. Dickerson continued to swing it well into May, where he posted a batting average of .307, and for the short sample size of June he’s hitting .375.

Over the weekend, Dickerson had a solid performance against the Cardinals, as he went 3-for-8 with a RBI and a double against St. Louis.

Dickerson has recorded hits in eight of his last 11 games, and he’ll carry a four-game hitting streak into the Pirates’ next series against one of the best pitching staffs in baseball with the Los Angeles Dodgers. 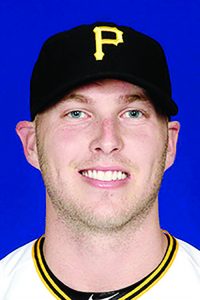