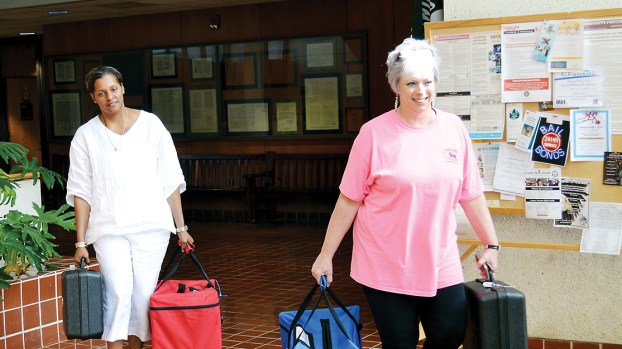 Photo by Donna Campbell/Poll volunteers pick up necessary equipment Monday afternoon to prepare for voting today. The primary elections will narrow the fields for Senate and House. Pictured are, from left, Jennifer Wilson and Kelli Smith.

Voters heading to the polls Tuesday will see 16 hopefuls on the ballot, each trying to win enough of the vote to avoid a runoff and secure their place in the November election.

The election will eliminate a majority of the candidates, narrowing the fields competing for seats in the House of Representatives and U.S. Senate. Polls will be open from 7 a.m. to 7 p.m. Tuesday and voters will be able to chose one primary for voting.

Following Gregg Harper’s decision not to run for re-election, six Republicans and two Democrats added their names to the ballot for Mississippi’s 3rd Congressional District.

The Republican candidates are:

In the senate race, six Democrats and one Republican will challenge Roger Wicker for his Senate seat.

Wicker, a 66-year-old senator who has represented Mississippi since 2007, will face challenger Richard Boyanton, a 69-year-old veteran and business owner.

For this election, his office received 237 absentee ballots, about a quarter of what a county or municipal election brings.

There are 20,509 active voters in Lincoln County.

“Our men and women have paid the ultimate price for us to keep that freedom,” he said. “So it’s very important not only to do it to recognize them that served before us, but also to choose who you want to represent you, so that’s your contact and your face on a local level but who will also represent you in Washington.”

A runoff, if necessary, will be held June 26.