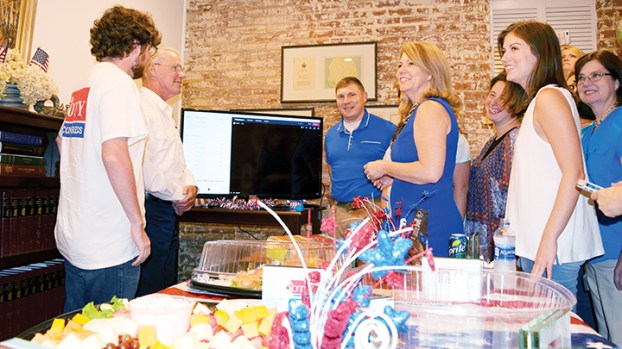 She was in good spirits, even though the party ended too early.

By 9:30 p.m. on election night, Sally Doty held court over only the most loyal of her followers, the dozen or so Republicans and family members still hanging tight with her in the campaign room in the back of her law office on Railroad Avenue in Brookhaven. Results were still coming in, but the numbers were getting farther and farther away — in the end, Madison and Rankin counties’ district attorney Michael Guest and former healthcare chief Whit Hughes advanced to the June 26 runoff, while Doty’s approximately 4,200 votes put her in a distant fourth place, where her bid to represent the 3rd Congressional District ended.

But at Doty’s headquarters, smiles were wide and glasses were full, and she accepted defeat with a grin.

“I was so pleased with the support I got in Lincoln County and the areas I represent in the state Senate,” she said. “We were hoping to make a bigger impact across the district, but it doesn’t look like that’s going to happen. Now, I’m going to practice law, continue with my Senate duties and spend a little more time with my family this week.”

At last count, Doty was in fourth place with 6,109 votes, good for only 11 percent of the district. Healthcare executive Morgan Dunn gained only 3,472 votes, and education consultant Katherine Tate was the Republican caboose with only 360 votes.

On the Democratic side, state Rep. Michael Ted Evans won outright, with his 14,477 votes totaling more than twice that of Newton policeman Kevin Michael Aycox. Evans will await the winner of the Republican runoff on June 26.

But Lincoln County, at least, belonged to Doty.

She carried her home county with more than 55 percent of the vote, with 1,944 of the 3,519 total Republican votes cast. Guest was a distant second in Lincoln County with 731 votes, or almost 21 percent, while Hughes collected 410 votes to Parker’s 367. Dunn got only 54 ballots to her name, and Tate only 11.

“It’s always going to be hard for anyone who can’t self-fund their campaign, or anyone outside the Jackson metro area, to win this district’s seat,” Doty said.

Election night was over much faster for U.S. Sen. Roger Wicker, who gathered up 116,893 votes — nearly 83 percent of all votes — to sail by challenger Richard Boyanton to win the Republican primary. Come November, he’ll defend his incumbency against the winner of the Democratic runoff, which will be held between state Rep. David Baria and philanthropist Howard Sherman.

Elsewhere in Mississippi, incumbent U.S. Rep. Steven Palazzo cruised to an easy Republican primary victory and will face Democratic challenger Jeramy Anderson in November for the right to represent the 4th Congressional District.

Incumbent U.S. Rep. Bennie Thompson had no challengers from either party and will continue his 25-year service to the Democratic Party.

Incumbent U.S. Rep. Trent Kelly had no Republican opponents in the race for 1st Congressional District and will face Democratic challenger Randy Wadkins — who also had no primary opponents — in November.

“We only had 232 absentee ballots cast,” he said. “I hate to say it, but when you just have those two offices on the ballot, there were probably people who didn’t even know it was Election Day.”

Something’s fishy, but in a good way

Teresa Viramontez loves to treat her daughter and grandson to some good, ol’ Southern home cooking. That’s why they go... read more