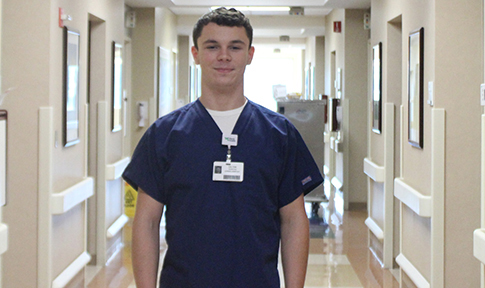 Thornton, who recently graduated from Warren Central high school, earned not only a high school diploma, but also his license as a Certified Nursing Assistant through a dual-enrollment program at Hinds Community College Vicksburg, and that certificate enabled him to begin working at Merit Health River Region just days after graduation.

“People always say you are going to get a job for all this stuff and it is going to happen so fast and is going to keep rolling and rolling like a snowball effect, but you never think it is actually going to happen,” Thornton said.

His first day on the job at River Region was May 28, but his journey to get to that point started more than a year before as he cared for his dad who was diagnosed with lung cancer in late 2016.

His dad died March 13, 2017 and the months Thornton had spent caring for him convinced him to become a nurse. What had seemed like a dream then is now a reality thanks in large part to the allied health program at Hinds, which enabled him to earn his CNA for free while still in high school.

Thornton’s story was featured in The Vicksburg Post in early April and soon after he was contacted by representatives from River Region offering him a job following graduation.

The first call came from Terence James, the director of the career technical program, who told Thornton that River Region was interested in hiring him. Then, two weeks later Kevin Samrow, the chief operating officer at River Region, called him and set up a meeting.

“I had the meeting with Kevin and Mrs. Terri and they said all this stuff of we are going to get you to work here, put you through orientation and we are going to put you are the floor,” Thornton said. “It was relief that somebody actually saw the good this dual-enrollment program is doing for people who want to be nurses.”

The offer was not just as an entry level CNA though. Thornton is currently two semesters away from securing his Licensed Practical Nurse certificate and River Region is going to help pay for his classes and then hire him as an LPN once he finishes. River Region is then planning to help him pay for his Registered Nurse license, as long as he continues to work at the hospital.

Thornton said the offer of not just a job going forward, but also help paying for his schooling changed his life “drastically,” because now he no longer has to worry about finding a job and how he is going to pay for school.

“I can’t thank them enough for doing this for me.”

Thornton is currently working the night shift on the fourth floor of River Region in the Medical-Surgery unit.

Now that Thornton is in the fold, Samrow said he hopes that he is just the first of many students River Region will be able to hire from the allied health program.

“The partnership between VWSD and Vicksburg’s hospital, Merit Health River Region, is an excellent combination to train our future healthcare professionals,” Samrow said. “We have hired Dalton and hope he is just the first of many VWSD students to join the Merit Health River Region family. We are working with school representatives to further integrate MHRR with the Health and Human Services Academy and feel fortunate to be a part of what Chad Shealy and Vicksburg Warren School Board have started.”