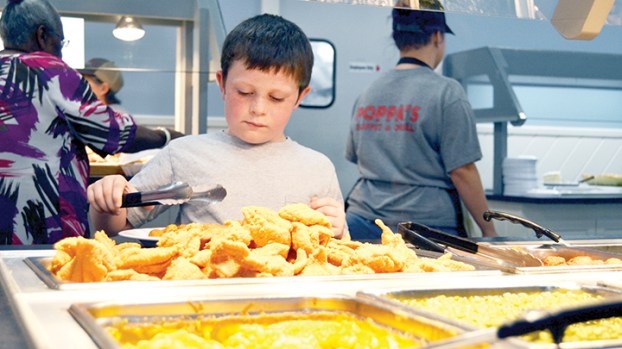 Photo by Donna Campbell/Chastin Wilson loads his plate with fried catfish Monday during the lunch rush at Poppa’s Buffet & Grill. The restaurant reopened recently after a five-week remodel.

Something’s fishy, but in a good way

Teresa Viramontez loves to treat her daughter and grandson to some good, ol’ Southern home cooking.

That’s why they go out to Poppa’s for lunch.

“It tastes like what you make at home,” she said, digging into a plate of Southern favorites during Monday lunch at Poppa’s Buffet & Grill.

The Wesson grandmother is joined at the table by her daughter, Rosie Twiner, and 7-year-old grandson, Chastin Wilson. It’s the only buffet they go to and they visit a few times a week.

“You want true Southern cooking, this is where you are going to come,” she said.

Poppa’s reopened recently after a five-week remodeling project. The entire interior was redone to give the dining room an open, airy look with lots of natural light. The food bars were rearranged and more were added to the fleet.

The salad bar, bread bar and hot bar are larger and more fruit was added to the dessert bar. They renovated the bathrooms as well.

Manager Peggy Stell has worked there longer than Poppa’s has been in existence. She worked in that location when it was Country Fishermen and Rusty’s and continued when it became Poppa’s in 2010. She said they’d talked about renovating the place for years, but when Keith Dorman was planning upgrades for Lincoln Plaza Shopping Center, where Poppa’s is located, owner Donnie Mitchell decided it was time to do more than talk.

“We knew we were ready for a new look,” she said.

They reopened May 11 and Stell was happy to see a lot of familiar faces return.

“We’ve actually got some new customers that are now regulars,” she said. “All the regulars returned and they’ve brought other people who have brought people. We’ve really been blessed.”

A typical Sunday before the renovations was 600 to 700 customers. They topped 800 Sunday and had an even larger crowd the week before.

“We so appreciate our customers,” she said.

They didn’t just add a coat of paint and new items on the buffet. They’re also open more nights and have a similar but different name.

The name change reflects additions to the menu. They’ll be grilling steak and mahi mahi.

Chastin probably won’t care. He likes his fish fried and piled high. He grabbed a set of tongs and plopped a few strips on his plate for lunch. Then he scattered on some tater tots and spooned on a fist-sized glob of gooey mac and cheese.

His mom tries to save room for dessert.

“Their bread pudding, oh my gosh. It’s the best I’ve ever put in my mouth,” she said.

James Castilaw has been a regular since the restaurant opened. He’s a widower and would rather eat Poppa’s cooking than his own. It’s not unusual to see him there for lunch every day and sometimes even at supper time.

He’s usually joined by friends or family, but he doesn’t mind dining alone.

“I recommend it to a lot of people,” he said.