Funeral services for Champ Clark Simmons Jr., of Brookhaven, are Saturday, June 9, 2018, at 11 a.m. at Hartman Jones Funeral Home in McComb with burial at Mt. Olive Cemetery in Smithdale. Rev. Alton Foster and Rev. Eric Moak will officiate the services.

Mr. Simmons, 84, died Monday, June 4, 2018, at Haven Hall Healthcare in Brookhaven. He was born Nov. 29, 1933, in Magnolia, to Champ Clark Simmons Sr. and Maude Alice Walker Simmons.  He was a member of Pisgah United Methodist Church.

He was a godly man who loved unconditionally and was loved deeply in return.  He had no children of his own but was always involved in the activities of his grandson, great-grandchildren and nephews.  They lovingly called him “PeePaw” and “Uncle Clark”. He was always their advocate and best friend.

He entered the Thornton family when his stepson Mike was 14. They were closer than brothers. After his retirement as a banking examiner he worked at the St. Andrews Mission Diner, cooking meals and delivering them to shut-ins and serving in the kitchen. He coached little league baseball in Summit when his grandson and nephews played, and enjoyed playing golf with his buddies, Lamar Stokes, Dave Young, Russell Stubbs and Jimmy King, which he did until his health prevented it. He sang many years in the gospel group the Kingdom Singers. He served his country in the Army and Army Reserves.

He loved his Lord and many times expressed to his family and friends that he was ready to go to heaven and be with Jesus.  Although the family is heartbroken at his passing, we grieve for ourselves as we know he left this place saved by grace and is no longer suffering. We praise God for the life and example of this godly man who blessed all those who knew him. Today we celebrate him home.

He is preceded in death by his parents; wife, Gloria Faye Temple Thornton Simmons; brother-in-law, Calvin Temple; sister-in-law and brother-in-law, Helen and Stewart Beatty; and half brother, Steve Simmons.

Pallbearers will be the children he loved and was so proud of as men, Jeff Temple, Champ Thornton, Mitch Temple, Hunter Temple, Pat Temple and Neal Bass. 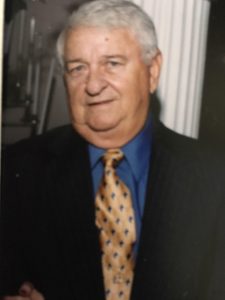