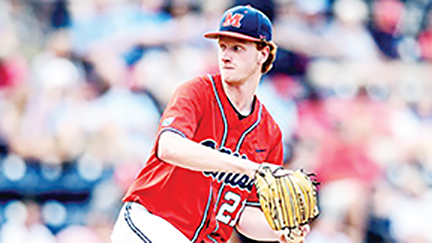 Jordan Fowler is a freshman All-American.

The Ole Miss left-hander earned the honor from Collegiate Baseball as part of the publication’s Freshman All-America team released Wednesday. Arizona State first baseman Spencer Torkelson and Bryant outfielder Ryan Ward were named the publication’s Co-Freshman Player of the Year while Minnesota right-hander Patrick Fredrickson was tabbed as Freshman Pitcher of the Year.

A 26th-round draft pick by the Texas Rangers last year who put his professional career on hold, Fowler emerged as the Rebels’ midweek starter and finished the season 7-0 in nine starts with a 3.20 earned run average — the best marks of any Ole Miss starter. Fowler allowed 40 hits and struck out 34 while walking 18 in 45 innings.

A favorite to join the weekend rotation next season with Ryan Rolison and Brady Feigl both likely gone after being selected in the top 5 rounds of this year’s MLB Draft, Fowler put together some of his best outings down the stretch. The Union City, Tennessee native twirled six scoreless innings in the Rebels’ 2-1 semifinal win over Texas A&M in the SEC Tournament before allowing just two earned runs in 5 1/3 innings in a 3-2 loss to Tennessee Tech on Monday that ended Ole Miss’ season in the Oxford Regional.

Watch your step this summer

Hog Chain’s Gerald Leger, 87, was on his way home from Wesson Wednesday when his Ford pickup had a disagreement... read more