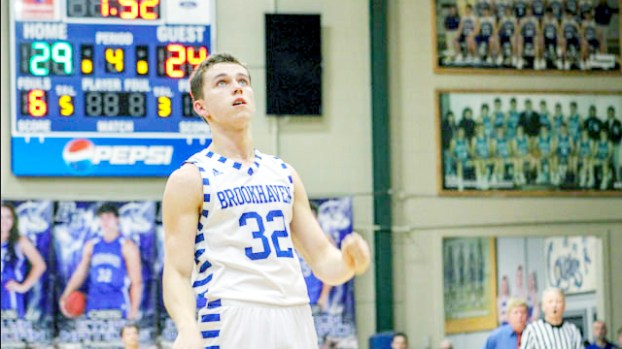 Daily Leader file photos Ethan Nations led the Cougars in scoring against St. Joe with 18 points. The Cougars would win the game in double overtime and advance to the state championship against Marshall Academy. Nations was named The Daily Leader All-Area MVP recently.

Brookhaven Academy won in double overtime against St. Joe in the MAIS AA semifinals to advance to the state championship.

The Cougars were one game away from playing in a state championship game against rival Marshall Academy, but St. Joe would push Brookhaven Academy to the brink.

The Cougars escaped St. Joe with a double overtime victory in the MAIS AA semifinals to send them to the state championship game.

The game was back-and-forth throughout the early stages of the contest. It became a defensive slugfest early in the first period, and both teams took leads throughout the second half. The game went into overtime as a result of a stellar defensive output from both teams in the last few minutes.

In the second overtime, the Cougars were able to take an early lead and keep St. Joe at arms’ length, allowing them to escape with a victory and play Marshall Academy in the state title game.

Senior Ethan Nations led the Cougars with 18 points in the contest, while juniors Cade Brown and Dawson Flowers scored 15 points.

The Cougars had been a part of deep playoff runs over the years, but always had the game that tripped them up.

With the back and forth nature of the contest against St. Joe it appeared the game could be a prime candidate for that, but the leadership from Brookhaven Academy didn’t let that unfold.

The win sent the Cougars into the state championship game against Marshall Academy, and Brookhaven Academy was able to come out with a 33-30 victory.

“I don’t know exactly what’s going through my mind right now after seeing a game like that. I’m exhausted and the kids are exhausted, but they did a great job,” said coach Josh Watts. “We never let the game get away from us, and fundamentals were a big key tonight. The main reason we won tonight was the fact that we wanted to win more than the other team, period.”

“That was a good team we beat, and we couldn’t have done anything else but what our coach said,” said junior Tanner Thurman. “Honestly, we didn’t have anything to do with that — it was all God. Coming off the bench, I had to trust in the Lord and do what I had to do.”

“We had a game plan going into the game, and we knew what we had to do,” said junior Dawson Flowers. “We came out, played defense, and did whatever it took to win.”

“I thought that was the game that showed what we were capable of,” senior Ethan Nations said. “There was a lot of pressure in the game with St. Joe, and we just kept battling in the game. We didn’t panic when adversity hit, and we just stayed the course. I felt like that game showed us what we were capable of, and we finished it off for the state championship against Marshall Academy.”

Jordan Fowler is a freshman All-American. The Ole Miss left-hander earned the honor from Collegiate Baseball as part of the... read more